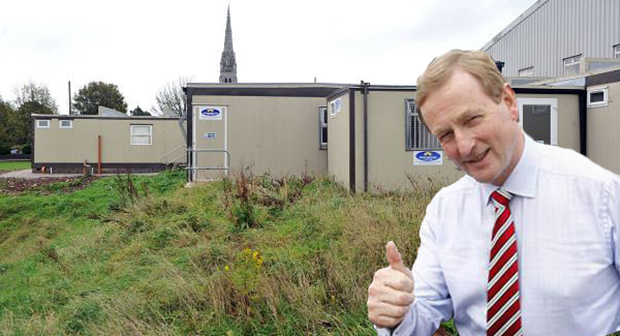 THE Government has announced a €2.7bn deal with British prefab supplier Prefabulous today in what it calls ‘The Final Solution’ to all of Ireland’s problems.

In a bid to tackle everything from homelessness to the conditions experienced by Asylum Seekers, Taoiseach Enda Kenny said prefabs were the way forward in dealing with large-scale accommodation issues. Asylum seekers would be given slightly better prefabs than they already occupy despite people pointing out ‘they come over here and take our inhumane conditions, the foreign bastards’.

“The answer was sitting in front of us this whole time,” he told WWN earlier, pointing to a security guard prefab at Leinster House gates. “Prefabs are great so they are. We can build schools, asylum centres, homeless shelters and even stack them on top of each other to make a prison. No more overcrowding! What more do we need?”

The multi-billion euro deal, which will see over two million units delivered to Ireland in the next 6 months, has received mixed reactions from the Irish public.

“My son’s school Glór na Mara has been waiting over 25 years for funding to build proper facilities,” said Mary Price, a Tramore parent of an Irish school student. “The school is prefab only and accommodates over 400 children. Sometimes the heating doesn’t work in the Winter time and they have to wear coats in class.

“It’s absolutely crazy the government is saying this is a solution”, confirmed the concerned mother seemingly unaware the department of education has on several occasions failed to spend the full amount of the money allocated to them to build new schools.

The Taoiseach echoed comments made by Dublin City Council officials who feel the short term solution to the long term problem of a lack of homes is to whack up some prefabs.

Council officials confirmed homeless people commonly found on the streets of the capital would be absolutely last in line for any kind of accommodation, placed above only foxes who have at this point proved incredibly adept at surviving on the streets.

Families prioritised in such a scheme would be required by law to write a thank you card to a particularly smug and unknown local councilor for their efforts in helping to house them.