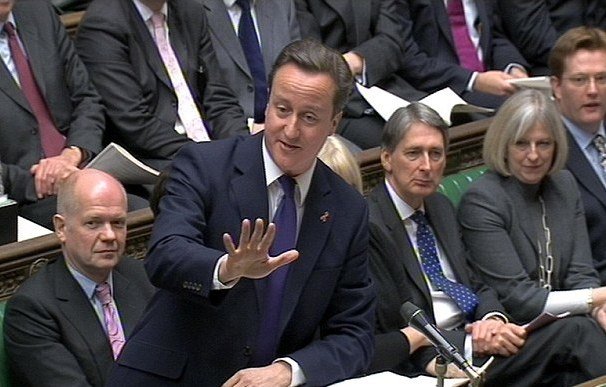 David Cameron has been frantically scrambling to find a coherent explanation for the continuation of arms export licences to Russia, fearing he may end up with diplomatic egg all over his poorly defined and slowly receding face.

News of the existence of still in place arms export licenses to Russia from Britain contradict comments made by the British prime minister in the house of commons on Monday when he stated “we, like, definitely don’t sell any weapons to Russia”.

His statement sits in stark contrast with the news that 200 licences to sell weapons to Russia remain in place. Cameron today returned to the house of commons to explain himself further and set the record straight.

“There’s obviously been a mix-up, what I meant to say was that we only sell ‘freedom rockets’ to Russia,” Cameron explained which prompted sighs of relief from the attending MPs.

Cameron slowly gained a smattering of applause as he used the tried and trusted American tactic of relating horrible realities to noble, terror-crushing endeavours.

“A number of manufacturers, who I refuse to name, have these licences have been explicitly told to make sure to put 30% more peace in their surface launched rockets,” Cameron reassured those in the commons.

The prime minister then humbly accepted the apology of those who had misunderstood the importance of exporting weapons to Russia, Israel, Saudi Arabia and Egypt.

Cameron refused to be drawn on the potential uses Russia could have for any number of purchases of arms but revealed all new purchases have a new safety setting which confirms Vladimir Putin himself must sign an agreement which says all weapons are to be used in the name of freedom and peace.