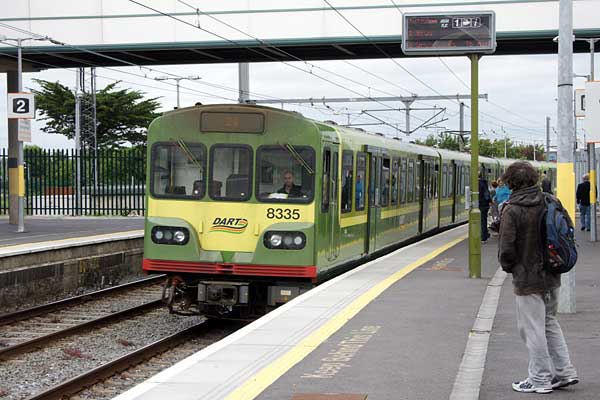 TODAY marks the 30th anniversary of the first DART service and passengers of the beloved Dublin Area Rapid Transit have celebrated in style by grabbing a few cans and heading out to Bray.

“To think I’ve never done this in all my years of commuting,” said Dublin resident Alan Lyons, “I was always the one trying to avoid the mowldy looking scroats who were downing cans and shouting at pensioners but I figured why not experience it for myself since its thirty years since this all started”.

The trip out to Bray with a plastic bag full of Dutch Gold is among the most vaunted trips one can take on the DART or in Ireland for that matter. The ‘few tins on the way out to Bray’ has been pushed by Tourism Ireland in recent years in the hope that American tourists would fall for the unique charm of downing a few before hitting the promenade.

DART staff have been hard at work in the run up to the 30th anniversary in order to give passengers that authentic trip to Bray with some booze feel.

“We sprayed in some of that wet old people smell that has been a staple of the commute for so long,” explained DART worker Ken Grogan, “we put down a few of those puddles of ‘is it beer or urine I can’t tell from here’ and we have stationed an average of three scumbags per carriage to give that genuine air of danger”.

So far today the 30th anniversary celebrations have matched commuters expectation and reverence for the DART while also allowing for 30 minute delays due to ‘technical faults’.

“I’m fuckin’ class,” screamed regular participant in the journey Anto Riley, “shurrup or I’ll knife you,” he added as he explained the joy one can derive from taking a window seat overlooking the journey southward.

Others appraised the DART’s 30th anniversary in less articulate fashion than Anto.

“You can’t deny the culture on show, the graffiti for one is mostly unintelligible and illiterate but some of those giant mickeys are top notch,” explained culture aficionado and writer at GreyBrayTheGayWay Henry Jennings, “they kind of sum up Ireland’s post-tiger identity crisis, are we or are we not all just poorly rendered mickeys on a cliff face looking for recognition?”