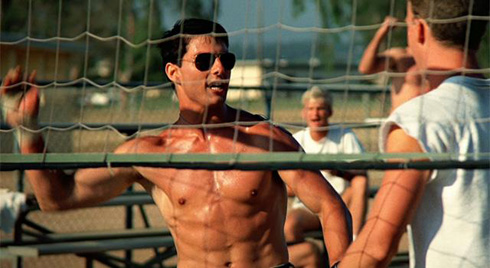 IT has been revealed that the delay in announcing the cabinet reshuffle, which had been due earlier in the week, was caused by Enda Kenny and Joan Burton spending time trying to perfect a cool handshake.

Having settled on the “over-under”, also referred to as the “high-low” but most commonly known as the “Top Gun High Five”, the Taoiseach and the Tanaiste spent the past two days trying to get their rhythms in sync in order to pull off the kickass move.

The new pairing, due to lead Ireland into previously unheard of realms of prosperity and equality, had initially opted to go for the Dillion-Dutch handshake made famous in the movie “Predator”. Although Mr. Kenny was keen to deliver the line “What’s duh mattuh, Burton? Labour got you pushing too many pencils?”, he was found to be quite unable to beat Ms. Burton in an arm wrestle. With the “Fresh Prince” greeting deemed to be “too black”, they moved in favour of the windmill greeting instead.

“For starters, Mr. Kenny had to be convinced that the maneuver involved a high five followed by a low five, and not a slap on each others arses as he initially thought” said Dail Slickness Counsellor JD McHugh, who coached the pair.

“So we had to watch Top Gun a few times to convince him. This was followed by an angry debate as to who was Maverick and who was Goose. The Taoiseach got very upset that there would be any doubt that he was Maverick, and in the end Ms. Burton agreed to be Goose as long as she was never referred to as such”.

Following two days of intense choreography practice which saw several slapped faces and awkward brushing of crotches, the leaders of the Irish parliament were ready to unveil their sweet greeting to the assembled press, before unveiling the make-up of the new cabinet of ministers.

The power-sharing coalition are to begin work on bringing Ireland back to former glory immediately after a six week recess during which time they hope to nail the Shimmy-Shimmy rap from Big.