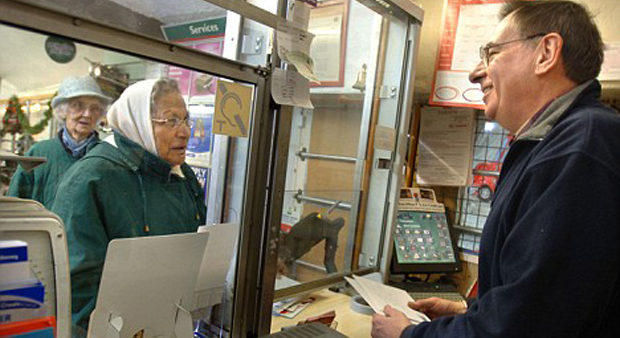 TENS of confused people were said to be ‘alleviated’ today after an elderly woman confirmed there was ‘miserable weather outside’ whilst waiting in a queue for the post office.

Sources say many customers were disorientated when they initially entered the building; not knowing what the hell was happening outside.

“I remember having my umbrella up as I was walking down here. Then when I got into the post office, I didn’t need it anymore for some reason.” said one man. “I must have been standing there for ten minutes just wondering what the hell had happened and why everything was so dark and gloomy outside. Then Mrs O’Brien from Ballybricken said it ‘miserable auld weather’ to one of the post office clerks.

“Nearly everyone took a sigh of relief. I started a slow clap and everyone soon joined in. Only for her we’d all have been still standing there scratching our heads and wondering why we were soaking wet.” he added.

Mrs. O’Brien said she came into the Post Office to collect her pension before heading off for some messages: “I usually get my money on a Monday and then head up to Super Value to meet my friends and block the entrance there chatting.

“When I was in the Post Office I could feel the anxiety in the air. Sure, I just had to tell them what was going on outside.” said the 76-year-old.

Since this mornings revelations hundreds of people have come forward with the news of the miserable weather outside.

Business owners across the city have said many customers are now confirming how wet and windy it is when you’re not inside a building.

“Only for people like that, we wouldn’t have a clue how horrible it is outside. At least now I’ll know to wear a rain jacket before venturing anywhere without a roof.” said pub owner James Hanrahan.