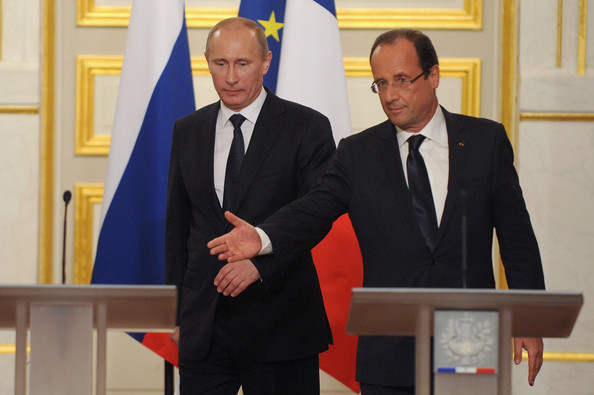 An emotional Francios Hollande broke the news to the people of France earlier today.

The president of France, Francios Hollande has confirmed what many in political circles had been speculating about for some time. France delivered their promise of unconditional surrender to Russian leader Vladimir Putin earlier this morning ‘just to be on the safe side’.

Hollande, keenly aware of France’s propensity for all-out surrendering and cowardice, took the brave step to accept the inevitable and has willfully offered up the former republic to the motherland of Russia.

“It comes as no shock really. We’ve known for days the French army were piling up their weapons, refusing to use them,” shared security expert Max Flanks, “and when Putin responded to Hollande’s text with ‘Ok’, the French leader panicked and hid under his desk. It doesn’t help the West’s cause at all.”

At a joint press conference, Vladimir Putin appeared quite reluctant to take charge of the Western nation, going as far as to say “What is going on Francios? You asked me to dinner, why are you giving me the keys to Versailles? I’m confused.”

American president Barack Obama has expressed his frustration at the news, telling press officials “Wait what? But they’re not even involved…they’re like thousands of miles away form the Ukrai…sweet Jesus!”

Here in Ireland, Tanaiste Eamon Gilmore has continued to publicly condemn Russia’s actions while privately sending apology texts to Vladimir Putin for speaking out on the matter.

France have now begun the arduous task of instructing everyone to wear white as well as hiding their wine, their food and their women from the soon to arrive Russian soldiers.