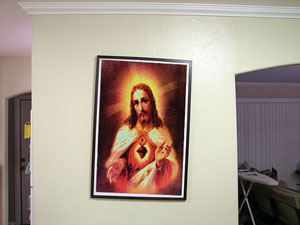 A DAY after an earthquake rocked Wexford to its core, specially trained crews have begun straightening picture frames and clearing broken tea-cups as rescue operations begin across the region.

Reports say the quake knocked over two ornaments in Margaret Mckilhenny’s house yesterday evening, and several sacred heart pictures were said to be ‘lopsided’ throughout the county. Another 6 people said they were woken from their sleep and couldn’t get back to bed with worry.

“I was three minutes late for work this morning.” said one female victim. “How can you sleep after that? I thought I’d never see my colleagues again.”

Some survivors in the town have expressed frustration about the government’s response, saying there is a huge shortage of spirit levels for straightening picture frames.

“I know it looks straight, but you can just never be sure unless you have a spirit level.” pleaded one man. “The government is useless. Bring back Fianna Fail!”

However, the International Federation of the Red Cross says its Wexford chapter has distributed more than 1,000 spirit levels and 3 blankets, as well as a bag of coal for Tommy Hennessey on main street.

Wexford county council announced it will erect an earthquake museum next year to remind future generations of all that was lost, with the motto “We will never forget”.