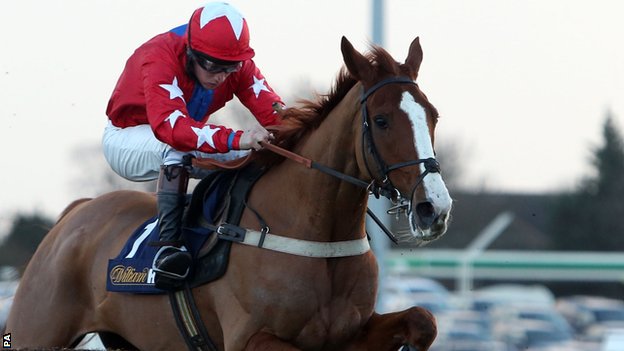 Sire De Grugy silenced critics, he did not know he had.

The horse was oblivious to the scores of humans cheering and praising him following his running and jumping session with unfamiliar horses.

The 11/4 favourite in the Queen Mother Champion Chase at Cheltenham ran in first after taking the lead prior to jumping the final fence to the distress of bookmakers all across the country.

When WWN asked if the 8-year-old is aware of what he has achieved his trainer, Gary Moore, said “If I’m honest, I doubt he possesses the cognitive functions needed to truly appreciate his victory.” A bold claim to make however, it is unclear whether the horse is capable of feeling offence to the comment.

“I can only speculate,” Mr. Moore later clarified, “but I think all he cares about is eating and getting the ride”. He’ll certainly be getting more than his fair share of horse vagina and oats as he won his owners £350,000.

WWN has learned that in celebration of his win the French horse, trained in Ireland, is said to have drank some water, defecated and just kind of stood around in the stable.