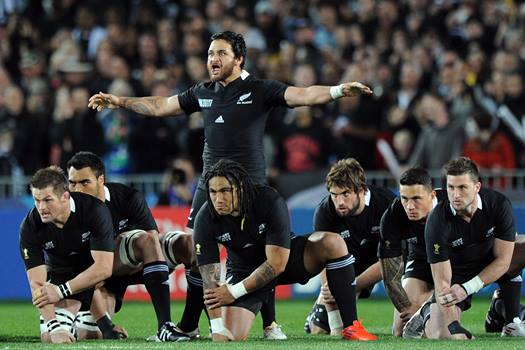 THE NEW ZEALAND rugby team have finally bowed to the public outcry for a new, less rigid Haka routine.

The Haka, a traditional Maori war cry, has been a staple of the New Zealand rugby team and is one of the sporting world’s most unique spectacles.

Despite this, sport fans have recently vocalised their disappointment with the same tired and boring Haka routine the New Zealand team have chosen to run with.

Ahead of this Sunday’s game against Ireland the All Blacks announced that they would be making dancing additions to the sacred ancestral war cry.

“After much soul searching and consultation with the public” began the statement read out by All Blacks captain Richie McCaw at a hastily assembled press conference, “we have heeded the public’s advice. We will be shaking our rumps in a manic fashion. This dance move has come to be known as ‘twerking’.”

A shocked press conference overwhelmed the captain with questions on the Haka revelations. McCaw responded to accusations of desecrating Maori tradition: “We play well. Our dancing is even better. We, like any team, seek to give ourselves the edge in a contest. Our feedback from coaching staff is that the Irish lads will be completely bewildered by what we’re doing, so it’s a tactic we’re running with.”

“Well, lets be honest the southern hemisphere teams have stolen a march on us again” offered George Hook, while Irish Times journalist Gerry Thornley was a bit more cautious in praising the All Blacks: “Twerking has no place in rugby but having said that I saw the run through earlier in training and they looked fabulous!”