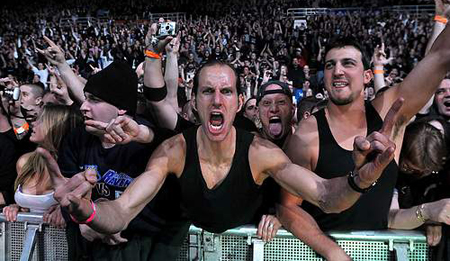 Indie rock darlings The National played to a captive audience at Dublin’s O2 arena this past Sunday.

While the hugely successful band delivered a raucous and passionate set list filled with their most enduring songs it has since emerged that the concert was deemed a failure by many.

Shane Mullen, a Kildare native and self-confessed ‘Nationalist’ is being awarded the unflattering title of ‘complete and utter prick’ by every other person in attendance at Sunday’s high profile gig.#

Through no fault of the headline band many fans have taken to social media sites to express their disappointment at the gig. Shane, fueled by a potent mix of alcohol and the desire to be loved and understood, took to singing every lyric from the top of his lungs. Such was his affinity with the music of the American band Shane was repeatedly heard screaming out the words to the band’s most popular songs in his distinctive and melodically challenged howl.

Some concert goers took to moving several metres away from vociferous fan but thanks to the fantastic acoustics at the venue Shane’s voice carried across the crowd ruining the experience for almost everyone.

Shane became irked by the indifference of some of the crowd members and so tried to awaken their passion for his beloved band by singing louder and cheering incessantly between songs.

The National were unavailable for comment when contacted by WWN but Ticketmaster released a brief statement following complaint from concert goers: “We wouldn’t refund your ticket if a speaker fell on your head and killed you so we’re hardly going to do it in this case are we?”