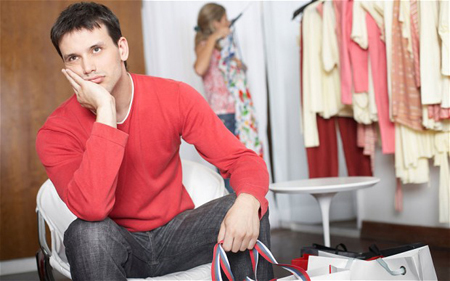 Reports are emerging today that Laois woman Áine O’Carroll (28) surprised her boyfriend Tom Stokes on his birthday by taking him to dinner.

Áine met Tom outside the Dublin offices where he worked and told him of her surprise plans, adding “I’ve just got to drop into a shop on the way if that’s alright”. Tom, touched by his girlfriend’s gesture, had no problem with a stop off before enjoying a meal in one of the country’s leading restaurants.

Tom soon regretted his decision as he found himself standing by the accessories in Topshop for close to 30 minutes. “So, are you like looking for something for a specific night out or something?” ventured Tom but he was met with a focused silence from Áine. “Áine? Have you heard anything I’ve said?” Tom asked.

“Yeah, yeah hang on, I’m finished looking now” Áine said as she picked up a gleaming rhinestone collar. Tom and Áine exited Topshop some 15 minutes later. The couple walked hand in hand through town as Tom thanked Áine once more for the meal he was about to be treated to but she was unresponsive and distant.

Áine’s attention was grabbed by something sparkling from the shop window of Zara, Tom found his body being dragged into a shop against its will. Resist as he might, Tom could do nothing to stop it’s magnetic pull.

“This is lovely, isn’t it?” Áine said as she pressed a bejeweled jacket against Tom’s face. “Are we not going to miss dinner? What time is it booked for?” Tom pleaded. Áine made her way to the changing room in a trance-like state.

Tom found a seat in the shoe section of Zara as he waited for his girlfriend to emerge. Confusingly Tom’s received a call from Áine. “Ok. Listen. There’s a red dress over by that blue bag I was staring at for 20 minutes. Grab the dress in a size 10 and bring it over to me, thanks”.

As Tom made his way toward Áine’s dress of choice, it dawned on him that perhaps the offer of birthday dinner was just a carefully disguised ruse to drag him on yet another shopping trip.

After trying on the dress Áine emerged from the changing room to a now grumpy Tom.

“I’m starving, we’re going to lose the table at this stage” barked Tom. “Ah, it’s probably a bit late at this stage,” Áine said, “will we just head home? And anyway, I couldn’t find anything that suited me so I’m fed up at this stage. You’d prefer take away anyway, yeah?” concluded the nefarious shopping mastermind.