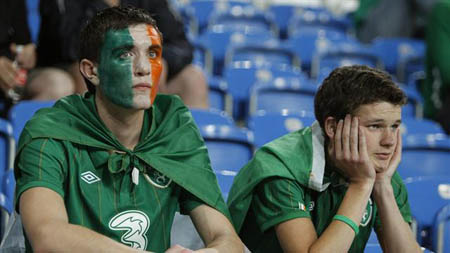 A SMALL band of dedicated Irish fans have made a surprising admission ahead of Ireland’s clash with Germany this evening.

The handful of fans interviewed by WWN confessed to missing ex-manager Giovanni Trapattoni despite calling for his head on a regular basis. A certain section of Irish supporters live for moaning about seemingly inconsequential details and it is already apparent in the post-Trapattoni era that these incidences are at a premium.

“Can’t believe I’m saying this but I feel uneasy about this Noel King’s approach. He hasn’t named the team 3 weeks early and it doesn’t look likely he’ll play a stiker at right wing,” offered Damien O’Reilly, a passionate Irish supporter, “so what am I supposed to do with my evening in the pub, what can I say to the lads like? ‘Oh eh things are looking up’. It is a very confusing time for me.”

WWN encountered a number of fans like Damien who seem to be suffering some sort of stockholm syndrome relating to Trapattoni’s regime; so used to frustration they can’t imagine a world in which they can watch half-decent football.

“A few of the lads mentioned getting together to watch the match, face painting, beers – the lot. How do I tell them I’d love to? And that I probably won’t smash the TV up in anger like the other times, this is so embarrassing,” confessed Mark Kelly, a troubled pro-Trapattoni fan.

“I know I sound mad but Trap-in!” said Liam Russell, another vociferous fan. “Look we don’t deserve this pass and move, over-lapping wing backs nonsense. Can we just go back to the old ways please? Noel’s bloody picked the only Irish player playing in the Champions League…I just want the opportunity to moan and be pessimistic and he’s making it very hard.”

Record levels of optimism are expected for tonight’s game until Germany score in the seventh minute at which point the normal moaning will resume.