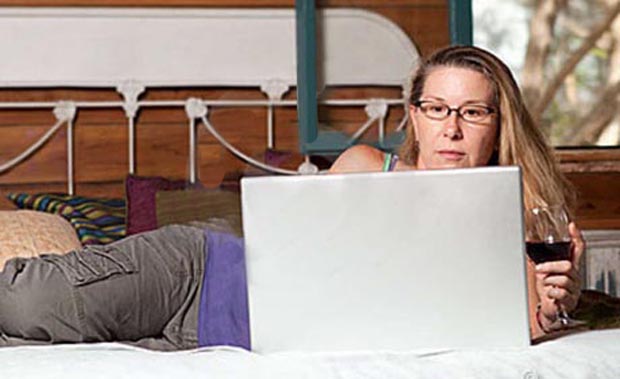 A NEW study has found a massive increase in ‘half-cut’ housewives leaving self-righteous comments on social networking sites like facebook and twitter, it has been revealed today.

The study, which was carried out by Irish Media Statistics, found that 5 out of every 10 housewives had nothing else better to do with their lives than leave smug comments on various facebook pages.

Experts believe the phenomenon is centred around an underlying a bid to gain some kind of self-worth from their boring, miserable lives.

“Of the four hundred and fifty six married women who took part in the study, over fifty percent found an uncontrollable urge to drink alcohol before posting comments on-line.” said head researcher into the study, Karl Tobin.

The study also found that ninety five percent of the female subjects experienced an overwhelming feeling of ‘self-importance’ after typing a ‘strongly worded opinion’ on-line.

“I’d usually have a glass of wine or two before logging on.” said housewife, Teresa Carey. “It usually doesn’t take me long to find something on facebook I don’t agree on.”

The 44-year-old admitted to WWN that she purposely ‘nit-picks’ at other peoples comments for the ‘sheer fuck of it’.

“It’s mostly male comments I start on.” she explained. “Like my husband, those bastards deserve everything they get.”

Psychiatrists believe social network sites are now a breeding ground for bored women with built-up-emotions, and claim the internet will be completely saturated with drunken housewives venting their current relationship issues by 2017.