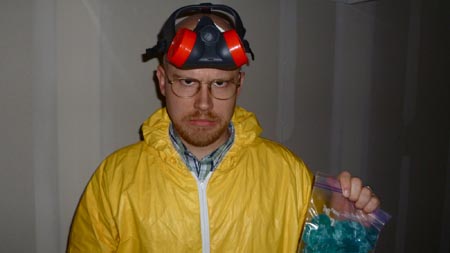 A YOUNG college student from county Meath has been making headlines this week as his part time business has come under scrutiny at home and in the media.

Conor Mulcahy, a 2nd year science student at UCD, was featured in the Sunday interview with the Sunday Business Post as well giving some interviews to local radio.

“It’s been a bit full on the last few days to be honest,” admitted the young entrepreneur.

The cottage industry crystal meth producer told the WWN exclusively that the publicity for his business was welcomed but he was unprepared for some of the criticism.

“You know you think ‘get a bit of seed money together, get things off the ground’. It’s a fertile market but people have sort of jumped to prejudge me as a businessman for not having a Walter White-sized drugs empire, I’m only trying my best to be fair”.

Chief among the young businessman’s critics have been his parents John and Maura.

“Oh sweet Jesus the mistakes this boy is making, basic stuff. The purity of the meth is fucking muck,” opined Maura raising her voice just enough as to be heard by her son in the next room.

“We understand it’s not easy but where’s the ambition in our fella?” asked Conor’s father John,

“There’s no squeezing out of the competition at all, zero blood shed. I haven’t heard him telling a single person to ‘tread lightly’ the pup! Worst of all he hasn’t even picked a snappy alter-ego name yet”.

“We’ve suggested a few names ‘Methmaster’, ‘Crystal Conor’, ‘Conorberg’, he didn’t like that one but sure you dress for the job you want not the job you have. This is it, isn’t it?” Maura offered.

Fingers, a local crystal meth user questioned Mulcahy’s drive. “If he is all stressful over a little fuss, then I won’t get a good buzz. His bad buzz is my bad buzz ya know what I mean?”

Despite the criticism Conor insists he will make a success of the business: “I think there is scope to kick on and make money to help me through college.

The old pair keep telling me to watch all of Breaking Bad again but truth be told I’ve never watched it in the first place.

If I hear them say ‘what would Walter White do?’ once more time I swear to God I’ll kill someone”.