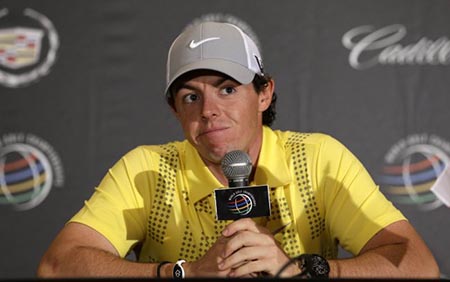 World number 2 Rory McIlroy faced some tough questions ahead of the defence of his US PGA Championship crown at Oak Hill later this week.

In the 12 months since his victory at Kiawah Island the Holywood titan’s commitment and dedication to money has been questioned by all and sundry, a claim McIlroy strongly rejects.

“I think everyone can see where my motivation is, I want to be at the top of my game,” McIlroy told assembled journalists, “the assertion that the drop in my golf game has somehow got in the way of my ability to earn money is pure nonsense frankly.”

It has been a difficult year on tour for McIlroy with less than stellar performances in golf’s most vaunted tournaments but the Northern Irishman remains defiant.

“Some have pointed to my golf as an indication of a reduced ability to attract brands and investment but I can assure all my fans that Nike will continue to pay through the nose for these curls.”

WWN contacted an expert in the field of sport to see if in fact golf could prove a stumbling block to vast riches for Rory McIlroy.

“Sports culture is such that with lucrative sponsorship deals already in place Mr. McIlroy would have to be found guilty of mass murder or of dropping out of the top 3,000 golfers in the world before Nike would consider ending their deal.

A case in point would be that other fellow who had sex with 256 women that were definitely not his wife and he has actually now received an improved contract from Nike.”