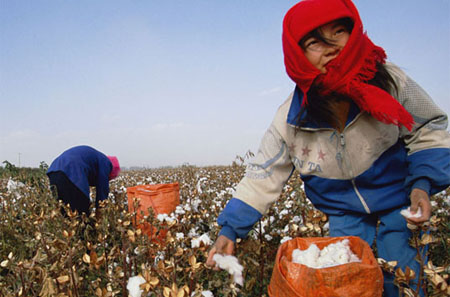 THE GOVERNMENT have announced an extra 30,000 work experience places for people on the dole who wish to avail of the states new JobBridge scheme, minister Joan Burton has revealed today.

Work began on a fourteen hundred acre cotton plantation in Lietrim late last year and is due to open for business next month.

The Social Protection Minister announced that anyone over the age of 13 will now be allowed to apply for the scheme, after they pass a brief medical examination.

Teenage cotton pickers between the ages of 13 and 18 will receive €25 for the 78 hour week on top of any pocket money or confirmation money they may already have saved.

Unemployed adults will receive a whopping €50 extra a week and still be allowed to keep their social welfare payments.

Ms. Bruton said the scheme was designed to get people falling back into love with work again and denied that JobBridge was just another way of exploiting young people into providing slave labour.

“Young people need to start appreciating money more. And the only way to teach that is to make them work hard for it.” said the minster.

News of the cotton picking plant comes days after another massive ‘work experience’ boost yesterday when An Bord Pleanála  announced its decision to give the go-ahead for a massive 27 story egyptian style pyramid which will be located in the heart of Dublin City centre.

The stone structure will have a 52,600 square metre base and will house some of the countries finest banking  and financial institutions.

It is estimated that over 2 million hand cut blocks will have to be carved and transported  from a qaury in Roscommon to complete the Pyramid.

Joan Bruton expects it will probably take over 400,000 jobBridge candidates to complete the structure over a twenty year period.