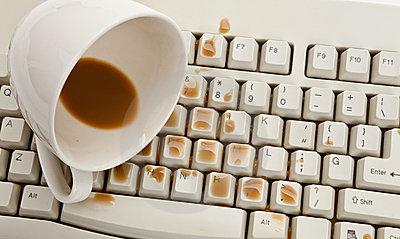 EUROPEAN countries rejoiced today after an 18-month sovereign debt crisis was brought to an end when a central bank employee accidentally spilled a skinny caramel Machiatto on the ECB’s main computer, erasing billions of euros in world dept.

IT worker Nathaniel King said he was performing checks on the computers mouse lead when he knocked over the beverage.

“I just didn’t see the cup. Someone must have left it there while I was leaning over the computer tower. I remember fiddling with the connection at the back and then I heard this awful whisping noise. I looked down and I seen coffee everywhere. The computer was sparking and smoke started rising from it.” said the 36-year-old.

A team of forensic computer scientists said there was no way of retrieving the lost data as it was already ‘lost’.

“The data on the hard drive cannot be retrieved because it is already lost.” said a forensic computer scientist who was trying to retrieve the lost data.

European Central Bank President Jean-Claude Trichet said all debts owed to the bank will now be ‘written off’ and a clean slate will be given to any country that borrowed money from the bank.

He said at a press conference earlier:  “There is nothing we can do. The information is gone. We just have to start over again. Hopefully everyone has learned their lesson this time and we can move on.”

The news was welcomed by european leaders who were at loggerheads over a three-pronged plan to save the single currency from total extinction.

Economists have stated that hopes for a solution looked very dim until the unwilling IT hero spilled the froathy latte, saving the economy from spiralling into a pit of weeping eye puss.

Mr.King said that since the ‘accident’ he has received several job offers from major companies around the world, including the Federal Reserve Bank in the US.

“Yesterday I was a nobody. Today I’m a hero. Everyone wants a piece of the ‘K’ man.

Celebrations have gotten under way in several EU member states including Ireland, Greece and Portugal this evening.