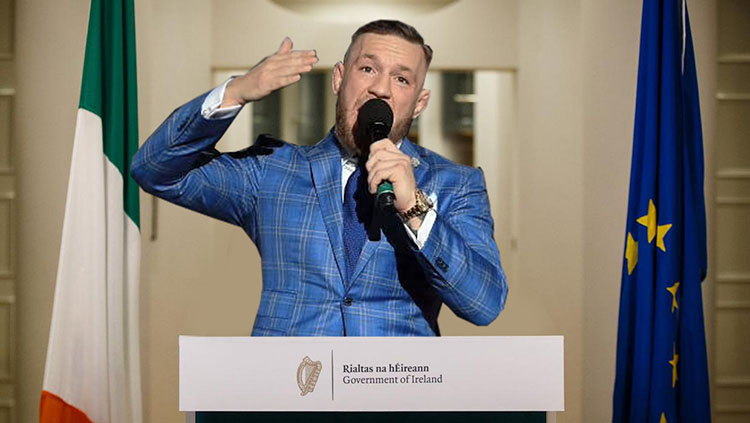 USING secret, nebulous science and cutting edge news technology WWN has gained access to a future in which Conor McGregor, recently taking to Twitter to slam the government’s response to a surge in Covid cases, is the sole person in charge of Ireland’s Covid strategy:

Unable to suppress his ‘warrior spirit’, Minister for Health McGregor predictably demands Covid-19 settle this in the octagon.

The public, initially on the Dubliner’s side, grow weary of him when in the build up to the bout against the virus he engages in vile slurs against Covid-19’s family and conjures up needless and sexually suggestive barbs implying that Covid-19’s wife wants to sleep with the faithful father-of-two.

After mistakenly saying it has been ‘3 years’ since Covid began and being roundly mocked for doing so, Minister McGregor gets into a physical altercation with a calendar and a heated standoff with a grandfather clock.

When discovering the clock is a grandfather he is unable to resist the urge and he punches it.

His second response to the epidemic spreading through the nation and driving up hospital numbers is to act swiftly, immediately reinstating the late licence for his Black Forge pub before declaring his work officially over.

“I never thought I’d root for Covid-19 but here we are,” members of the public are heard to say in passing.

NPHET is disbanded and replaced with a lad McGregor knows who ceases the booster injection programme in favour of a nationwide rollout of a snortable alternatives which boost the body’s responses and gets much needed adrenaline flowing.

Addressing the long neglected aspect of Covid-19 strategy; the disease is airborne and spreads easily in poor ventilated spaces, Minister McGregor personally throws weighty objects through the windows of buses, schools and offices around the country.

Despite his best efforts, Minister McGregor comes under criticism from the public after appearing in an interview on CNN.

“Poisonous individual! Buffoon. Get this blithering fool off my screen. Show pony phony!” one angry Twitter user says of Minister McGregor after he misses a number of HSE meetings to rack up a further 150 driving offences.

There is some disquiet when it is discovered Minister McGregor was using official Department of Health envelopes to send Machine Gun Kelly positives Covid-19 swabs in the post.

Famed for his resilience and refusing to take no for an answer, Minister McGregor challenges Covid-19 to several more fights with increasingly diminishing returns as fans begin tuning out.

His 24 hour, very much disputed reign as Minister for Health sees McGregor forced to resign under a cloud after mistakenly spending the Department’s Xmas party budget on 20 kilos of talcum powder.