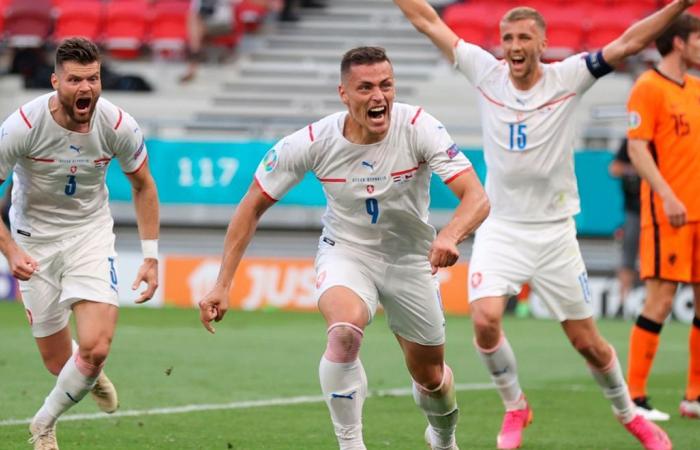 PLAYED in the 30 degree heat of Budapest, the conditions for Netherlands and Czech Republic’s last 16 tie were hotter than the skin of a slumbering Irish man on holidays who was left out on a sun lounger all day.

The Czechs refused to go Dutch on the result and by winning 2-0 they caused a bigger upset than a paternity test on the Jerry Springer show.

The Dutch came close to taking the lead when a clever flick by Depay helped Malen run clean through on goal but the forward had the finishing skills of the crowd ‘building’ the Children’s Hospital.

At the other end, scared Schickless by a Czech striker bearing down on his shoulder, De Ligt knocked the ball away with his hand like he was auditioning for the Dutch Olympic volleyball team.

Czech forward Holes headed in a goal from a corner, sparking wild celebrations in the packed stadium, but luckily Uefa confirmed the Delta variant hadn’t managed to get a ticket to the game.

The Czechs then discovered the time wasting ability of a pensioner paying for their weekly shop using only one cent coins as they sought to see out the game.

With holes left in the Dutch defence Holes passed to his teammate who Schick’d it in the back of net, sealing a win which sees the Dutch thrown out of the tournament like a man turning up to his ex’s wedding reception.

The final whistle saw the most depressed crowds of people dressed in orange this side of the 12th of July.

Belgium took on Portugal in the evening kickoff on a pitch which wouldn’t look out of place at the Ploughing Championships.

The opening half was cagier than a US detention centre on the Mexican border with neither side taking control of the game.

Back-up Hazard, Thorgan, broke the deadlock before half time with a strike from outside the box which moved in the air like an astronaut reentering the Earth’s atmosphere with a failing parachute.

Delivering more kicks than a barman on South William Street, the game became a nasty and niggly affair.

Palhinha has officially added ‘ankle snapper’ to his LinkedIn CV after his challenge on De Bruyne saw the Man City man limp out of the game.

Searching for an equaliser, Portugal brought on more attacking firepower than the Russia army spotting a British Navy vessel close to their waters, but only left-back Guerreiro came close when his strike hit the post.

Pepe, the only footballer to learn his defensive skills from the IDF, then decided to remind every football fan of the reason they say ‘oh he’s a dirty prick’ every time his face appears on the TV.

A chore of a game which was more unwatchable than a Mrs Browns Boys marathon, the game was declared ‘worth it’ by football fans who got to see the look on Ronaldo’s face at full time.

Today’s games sees Spain ask the referee if they can have a corner or a kick out instead of a penalty in their game against Croatia after missing their last 55 spot kicks, while France have asked Switzerland if they need help checking out of their hotel and getting a flight home from the tournament.