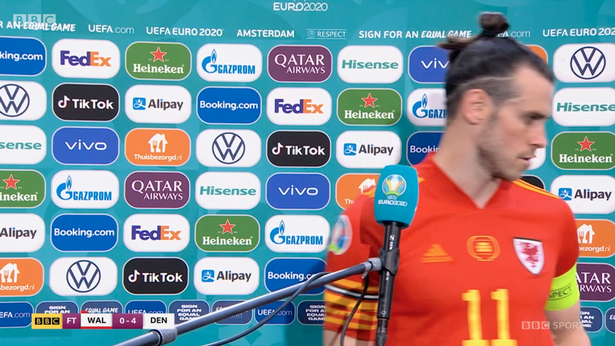 IN THE FIRST game of the day in Amsterdam, Denmark booked their place in the quarter finals with a victory even more convincing than Meryl Streep’s acting.

Taking hold of the game Kasper Dolberg ghosted by the Welsh defence and scored with a strike from outside of the box.

The Welsh defence soon began creaking like the floorboards in a haunted house as they struggled against a terrifying Danish attack.

For Wales to win they needed Ramsey and Bale to come out firing like Al Pacino in Scarface, but Denmark kept the pair quieter than the Chinese government keeps pro-democracy newspapers in Hong Kong.

Wales began enduring more blows than a stag party in the Red Light District as Conor Robots went down injured, clutching his groin like a man being informed by his wife she had booked him in for a vasectomy.

It went from bad to worse for Wales as Kasper was back to haunt them again with his second goal, created by a Welsh defensive clearance so weak and pathetic Boris Johnson hired it as his Minister for Health.

At times Wales looked as lost and confused in Amsterdam as an overeager student who wolfed down their first space cake in one bite.

In a post-match interview the BBC asked Gareth Bale about his future in football prompting him to angrily walk away like he’d just been asked to watch Matt Hancock’s sextape.

Italy took on Austria in the evening kickoff which turned out to have the dullest second half since Waiting for Godot.

Marko Arnautovic scored a header in the 64th minute but replays showed the VAR official had Italy in the office sweepstakes.

Italy spent much of the game surrounding the referee to protest like he’d just extended Covid restrictions for another decade.

Taking a break from delivering more exaggerated hand gestures than a mime tasked with describing the meltdown of a nuclear reactor, Italy finally sparked into life in extra time in no small part due to Mancini making 49 substitutions.

Chiesa hammered home a wonderful goal with skill so masterful we’re still watching the replays. Pessina followed up with a great finish as the courageous Austrians tired like a 7-year-old trying to make it to midnight on New Years Eve.

Human step ladder and 6ft 4″ striker Kalajdzic expertly threw his head on a corner as he fell to meet the ball with all the majesty of a Californian redwood collapsing in a forest, setting up a tension filled final 5 minutes. It was the first goal Italy have conceded since the Cretaceous period but wasn’t enough to turn the game around.

Today’s games see the Netherlands take on the Czech Republic in the ‘who are the neutrals will be booing against Denmark in the next round derby’, while Belgium take on Portugal in a game that is required by law to have at least 3 penalties for Ronaldo.