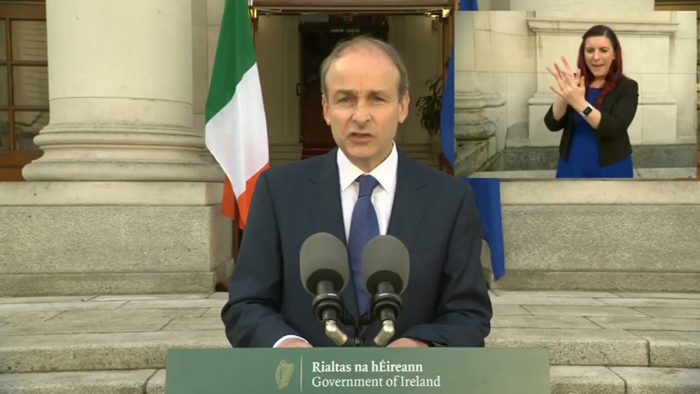 AS THE Taoiseach confirmed ‘the end is near’ for the 18th entering/leaving lockdown speech in a row, the nation watched on for word of what joyous freedoms awaited them in the near future.

Here’s everything you need to know about the easing of restrictions:

The exercise limit being extended to allow people travel anywhere within their county will see people get bored to death of walks in a variety of new locations.

Your hair will remain in shite state altogether until at least early May as hairdressers remain closed.

Out of shape GAA heads have until the 19th of April to free themselves from under piles of takeaway debris to get themselves ‘ready for county’.

All high-performing athletes can resume training on this date, including all competitive wankers.

A builder should be able to go to the zoo following a round of golf after a hard day’s work some time in early May.

Expect a flood of ‘where are the guards?’ photos capturing people in parks having a few cans to go viral as two households can meet up with one another outdoors for social and recreational purposes.

You cannot socialise in private gardens, as government scientists confirmed Covid loves a garden BBQ. At existing arrangement with the government will see Met Éireann provide nonstop rain from the 12th of April onwards if needed.

Attendances at funerals is to increase to 25 people, or 1,000 people if it’s for a former Provisional IRA member in Northern Ireland.

After switching to an aged-based system for vaccines a number of 3-year-old gardaí moonlighting as teachers have said they felt particularly hard done by.

RTÉ have secured the live broadcast rights to the meeting of Ireland’s two fully vaccinated people meeting up indoors for the first time.

None of the necessary resources or manpower will be made available to bolster contact tracing, testing and other means to help identify and snuff out any potential rise in cases as a result of easing restrictions.