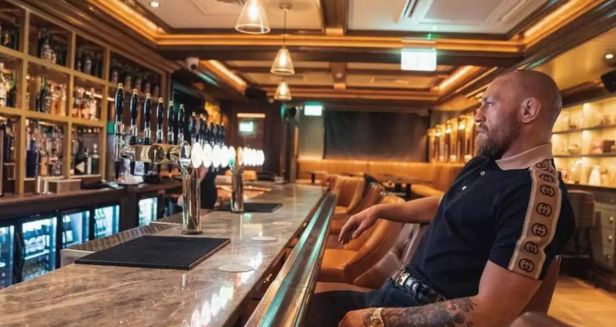 FROM the octagon to the kitchen; MMA superstar Conor McGregor has invested €1mn in converting his €1.9mn Crumlin pub into a €2.9mn gastropub, and the fighter has some knockout meals ready for customers as soon as government guidelines allow.

On offer in the Black Forge will be:

McGregor has doled a few of these out in his time, but this monster of a burger will be the first one he’s served in a pub that didn’t cost him an out-of-court settlement.

It is claimed that this meal will purposefully be made to taste as disgusting as possible, in a bid to discredit the name of Khabib Nurmagomedov, McGregor’s rival who he tapped out to 2018. McGregor is said to be okay with serving a sub-par meal as long as he gets to hear customers say ‘that Khabib is only a fuckin’ pox’ four times a day.

Eager to not go down the McDonald’s route of having everything named ‘Mc-Something’, McGregor is going to mix it up a bit with his various aliases, such as the Notorious 18″ Meat Deluxe Pizza after his ring name, and the ‘Well-Known Sports Star’ Mixed Grill, after how his name appears in newspapers in connection to court cases.

When it’s time for things to start kickin’ off, then it’s time for Chicken Off, a massive protein-packed platter that will make you feel like you could just throw a hand truck through a bus window! Served with a Coke.

Although the venue has yet to open its doors, thousands of McGregor fans have already declared it the best restaurant in the world and if you disagree, boy do they have a homophobic slur for you.