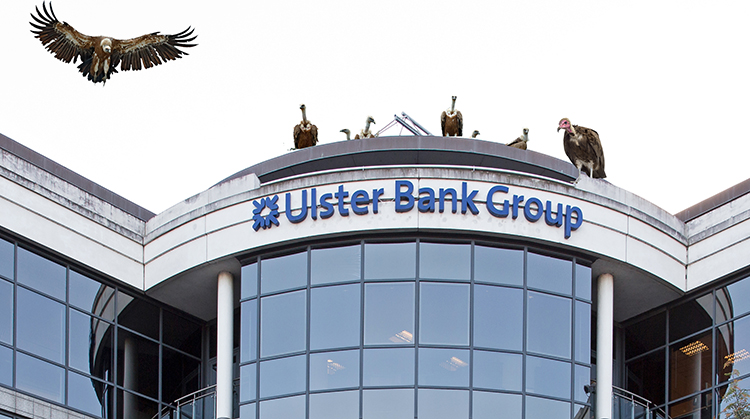 DESPITE robust laws in place to protect mortgage holders and a pledge for a gradual closing down to take place over several years, Ulster Bank branch security guards have spent the day trying to fend off ravenous packs of vultures, WWN can confirm.

With the departing bank’s mortgage book presenting a tempting investment opportunity for anyone with enough money and absolutely no concern for mortgage holders, the skies outside branches have been dominated by the sight of birds of prey.

“Jesus it’s like someone sewed a few seagulls together and injected them with pure evil,” shouted one employee as he waved a broom in the air trying to disperse the growing presence of vultures, who love nothing more than to claw away at carcasses.

“We thought we could just shoot them for being a nuisance and intimidating customers, but turns out they’re a protected species with special treatment from the government,” added the guard, who sadly will be one of 2,800 people to lose their jobs as a result of Ulster Bank leaving the Irish market.

A spokesperson for the vultures said that there is nothing to worry about, and that if anything Ireland doesn’t know how lucky it is to have these vultures circling them constantly, and no, you’re mistaken the vulture didn’t just shit on you.

“Look, I understand it I’d be a bit scared by the sight of vultures trying to swoop down on my mortgage, but protections are in place which means your mortgage could end being switched to a number of banks such as this one here that shafted thousands, this one that was bailed out by the taxpayer or this one that was always bailed out too,” confirmed a Central Bank official.