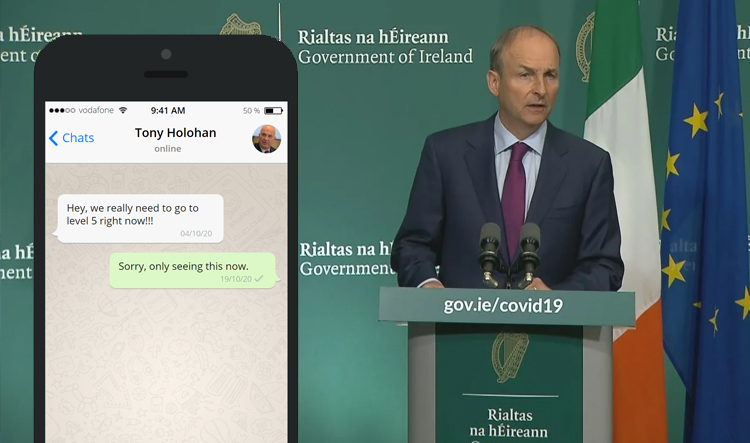 THE IRISH government is set to place the country into Level 5 for six weeks, as a result of finally getting around to reading a text message NPHET sent two weeks ago, in which it urged such immediate action in a bid to reverse the worrying increase in Covid-19 cases.

“Only seeing this now,” Micheál Martin shot back in a text to NPHET despite the message clearly having two blue tick marks beside from the evening it was originally sent 14 days ago.

“Sorry, don’t always have my phone on me. I’m actually on a bit of digital detox – not using my phone as much, dunno if you’ve seen the news of late but it’d do your head in,” added Tanáiste Leo Varadkar, now somehow texting back to a WhatsApp conversation with NPHET no one added him into.

“What mobile network are you with, are ya Three or Vodafone? Whichever one you are, that’s the network my phone has weird delays with, that’s why we’re only responding now, swear,” added Minister for Health Stephen Donnelly.

Fresh frustration, uncertainty and heartache for the Irish public comes now as further restrictions are to be implemented for as many as 6 weeks in a bid ensure the health system isn’t crippled beyond its already crippled existence.

“Look it, d’ya ever be watching a channel on TV and realise it’s one of those ‘plus one’ ones? You’re technically an hour behind? I dunno how we did it, but we’ve been on a delay with NPHET advice, only getting it two weeks after the necessary action is needed. Talk about bad luck that we’re in no way to blame for, huh?” added a government spokesperson, convincing absolutley no one.