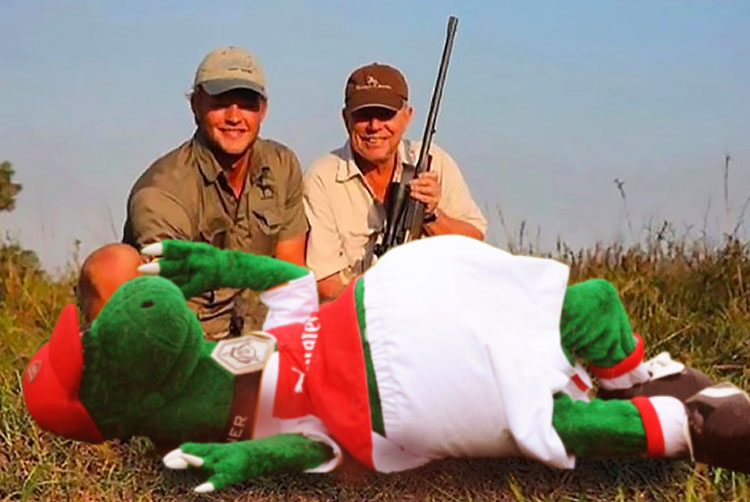 TRAGEDY has befallen one of the most iconic figures in the world of football, on what was supposed to be his first day of official retirement, WWN can sadly reveal.

Arsenal fans, who expected to wake up feeling energised and excited by the signing of Thomas Partey from Atletico Madrid, are instead in the depths of grief and mourning after their beloved mascot Gunnersaurus was shot and killed by US poachers while on he was on first post-retirement holiday in Kenya.

“Poor bastard was only one day into retirement,” a distraught Mikel Arteta relayed to WWN, as he clutched the t-shirt canon and Arsenal club badge Gunnersaurus had turned in on his final day working at the club just days ago.

Although Rex’s age is unknown it is presumed he emerged from the primordial sludge some time before the dawn of man and was first employed by the club as Dennis Bergkamp’s emotional support animal on flights to away games in the Champion’s League.

Gunnersaurus Rex’s valuable polyester green hide is sadly something in high demand on the black market which made him an irresistible target for poachers, who had been cooperating with a group of overweight American tourists on a hunting trip.

“I’m gonna mount this bad boy above my fireplace,” confirmed a US tourist by the name of Stan, as he cruelly donned Rex’s decapitated head like a hat.

Not without controversy, Rex leaves behind dozens of illegitimate children he allegedly fathered with a number of female Arsenal supporters wowed by his status and position in the game.

Rex’s death isn’t the only incident of recent violence visited upon mascots as West Brom’s iconic Boiler Man was found dumped in the wrong section of his local recycling centre just last week.