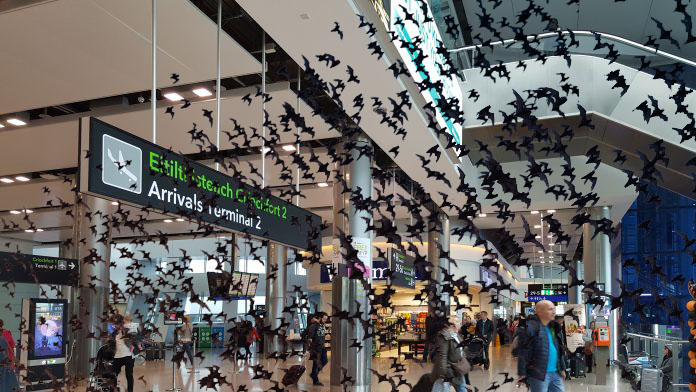 DESPITE desperate pleas with the government to act, a helpless nation was left to watch on as over 10,000 Covid-19 infected bats passed through Dublin airport without the proper checks.

Since the Aer Lingus Wuhan to Dublin flight via New York, Madrid, London and Rome landed this morning, social media has been flooded with disturbing photos of hundreds of the bats drinking by the canal in the good weather after a successful visit to bat tourist hot spots such as Mitchelstown caves.

Leading figures from the comment sections of Ireland who bravely write ‘Close the borders’ in all caps under every news article or social media post have asked the government to consider implementing some of their proposals before it’s too late.

“All flight passengers should be shot with a traquiliser dart upon arrival and cryogenically frozen until a vaccine is found, I don’t care if they’re doctors, and if that can’t be done just send them to Direct Provision if they’re not properly Irish” confirmed one man, who has personally done more damage with his own lax interpretation of two metre social distancing and ‘necessary trips’ than 1 million bats ever could.

“And the airport security is doing nothing. They’re handing out ‘here’s how to cough on people’ leaflets, I seen it with my own eyes,” confirmed one man, who has awoken every day since this pandemic broke, screaming ‘it’s a disgrace’.

However, in a game-changing move that could appease the Irish people and see them change their tune, one of the visiting bats posted a now viral Instagram picture of the Cliffs of Moher with the caption ‘oh my God, Ireland is so beautiful’, gaining thousands of likes.