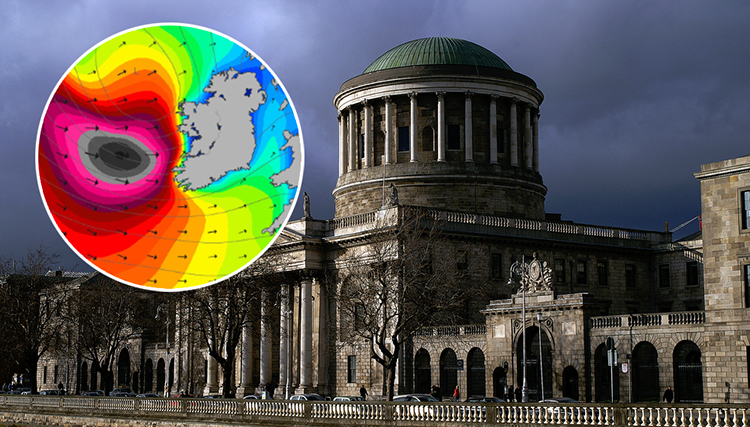 CLAIMING storms are nothing sort of ‘obsessed’ with its landmass, Ireland has begun a process in the High Court which if successful, will see storms banned from coming within 10km of the island and prevented from even attempting to contact Ireland’s coastline, islands, rocky outposts, midlands and busy cities.

“Honestly judge, we can’t go anywhere without a prick of a storm following us,” explained the Irish people, representing themselves in a landmark legal case.

“Perhaps you’ll forgive us for not knowing the legal term, but could you tell these bastards to leave off and get a fucking life,” added Ireland.

The recent frequency of uninvited storms suffocating Ireland with attention amounts to nothing sort of stalking, Ireland has claimed and a restraining order would be the appropriate course of action.

The packed court, filled with the majority of the nation’s population, heard of a landmark case; the Irish Public V. Arthur’s Day which successfully argued ‘we’ve enough to be fucking dealing with’ and saw the excuse for drunken mayhem banned from Ireland.

However, a failure to use ‘we’ve enough to be fucking dealing with’ argument in banning Mrs Brown’s Boys broadcasts means this sort of legal strategy isn’t always successful.

“Can’t even leave the fucking house without feeling a storm is near, watching, waiting, ready to strike and fuck up a new haircut or drench us to the bone,” the emotional testimony from Ireland added.

A ruling is expected shortly, but experts have warned Ireland to plan accordingly and act as if there weekend is going to be completely ruined, as has been the case with every weekend so far this year.