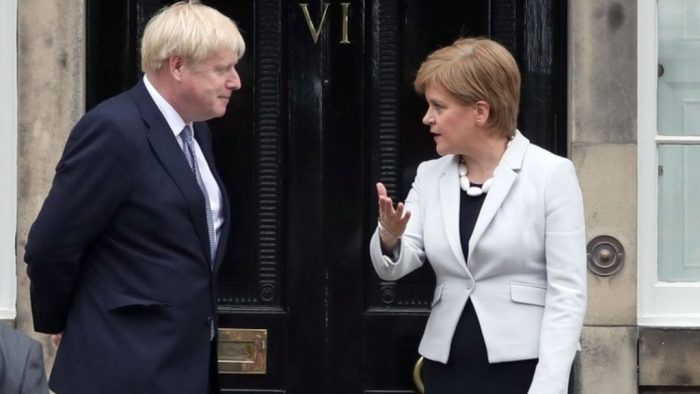 FRESH from being embarrassed by protesters as he met with Scottish First Minister Nicola Sturgeon in Scotland, British PM Boris Johnson corrected the official record of events to better reflect the true nature of the encounter.

“To the untrained ear, these rabid, vowel-stretching Scottish neanderthals sounded at first like they were voicing their disapproval for me by booing loudly and shouting ‘lying arsehole’,” explained Johnson.

“But they’re just an inebriated group of Scottish junkies high on Irn Bru; injected directly into their eyeballs which are attached to their heads, that we all know is home to a smaller brain than the one contained in an English skull, they’re probably filming Trainspotting 3 so pay them no attention” confirmed Johnson running out of stereotypes but dispelling the myth that he is an entitled and out-of-touch posh English twat with nothing but contempt for Scotland.

The booing incident has helped Johnson exude the sense that everything is going according to plan in his first few days at the helm, similarly, sterling nearly hitting a 34-year low in response to his blurry, out of focus vision for Brexit is yet another example of the brave new lack of a future Johnson is fumbling Britain towards.

Johnson was in Scotland to see his Department of You Lot Should Be Grateful unveil a £300 million funding initiative for Scotland, Wales, Northern Ireland and Southern Rhodesia, which will in no way offset the negative financial impact of a hard Brexit.

Meanwhile, Taoiseach Leo Varadkar enters his 83rd hour of waiting patiently for Johnson to ring him to officially put his complete ignorance about the Irish border on record.