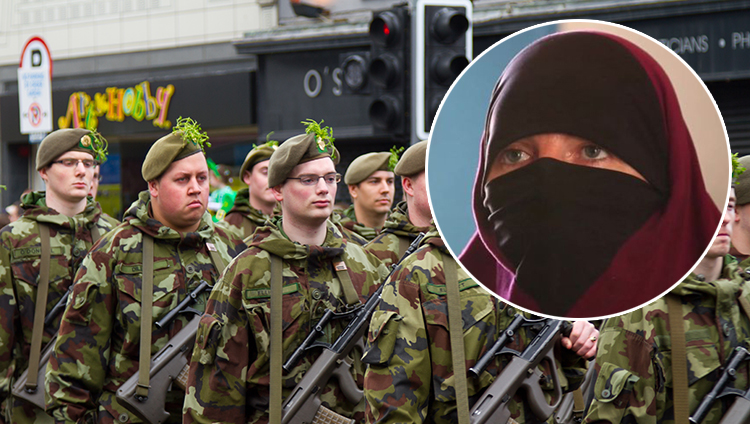 IT’S ONE of the most talked Irish security issues of the past decade, supplanting the very real threats of gangland gun violence and militant Republicans, but does Lisa Smith, the Dundalk women who joined ISIS pose such a severe risk to Ireland’s national security that the government are considering the unthinkable; paying the defence forces a decent wage? WWN investigates.

Ensconced in a Department of Defence bunker, WWN has been granted exclusive access and we can see all sorts of important files relating to national security piled up on a desk. They’re called ‘disaster scenarios’ and are marked ‘returning ISIS militants’, ‘IRA comeback’, ‘Hard Brexit border’, ‘Jesus, what if Michael D dies?’ and ‘national Tayto shortage’. All very severe scenarios, all very dangerous and real but top of the list is clearly one woman.

Is the reality of people who were proponents and supporters of the Islamic State returning to Ireland, and the worst case scenario fallout from that, such a cataclysmic existential threat to Irish way of life that the government would check down the back of the couch for spare change so they could give the defence forces meaningful wage increases and working conditions?

So that’s what it would take to reverse pay cuts from 2013 and stop the mass exodus from the already stretched workforce?

“Jesus Christ, hang on, this isn’t an inter-galatic alien force invading earth and sucking 8 billion peoples’ brains up through some sort of big mad alien straw yoke. Let’s get some perspective on this current issue of returning members of ISIS,” added the bean counter.

The government conceded that pay increase for the defence forces may be coming in the next few months however, not on the level that would see an to soldiers sleeping in cars.

“Sorry lads, sure isn’t she one of your own. Only yourself to blame really,” added the Department of Finance official before pissing away some money on a tax break for a US investment fund buying up apartments.