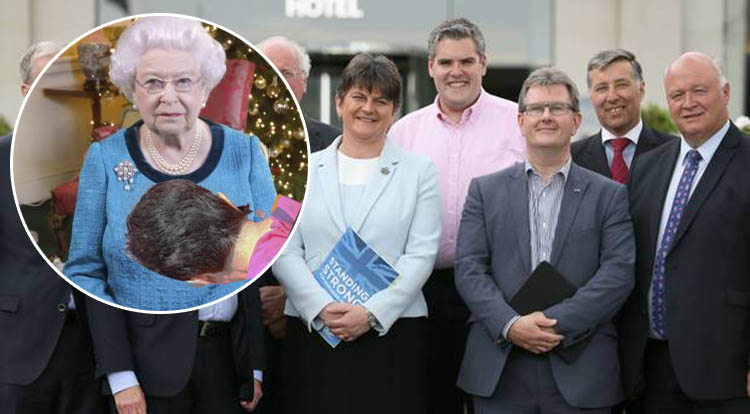 AS BRITISH PM Theresa May battles for her political life in the House of Commons, facing off opposition to a draft withdrawal agreement with the EU, her minority partners in government, the DUP, have ruled any deal that does not include a clause in it which permits them to be breastfed by the Queen.

The pressure already piled on May following the resignation of five ministers from her cabinet since last night, the DUP have significantly ramped things up with this morning’s ultimatum which places the future of the sacred Union teetering on the brink.

“We thought Theresa was in trouble when Raab, the man who supposedly negotiated the EU deal, resigned because he didn’t agree with the deal he just agreed to but now the DUP wants to latch onto the Queen’s breasts?” confirmed one insider, who suggested this was only the 8th craziest thing to happen in the last few hours in British politics.

Passionately talking about almost everything except the actual concerns of the citizens they supposedly represent, the DUP spoke to the media earlier to outline their position.

“The sanctity of the United Kingdom is absolute. We cannot in good conscience support this deal, as it disgracefully gives the people of Northern Ireland endless economic and social advantages and honours the Good Friday Agreement upon which peace on the island has been sustained. Plus, we want to be cradled in the bosom of Queen Elizabeth II and drink her milk,” DUP Arlene Foster is believed to have said with a steely stare that reinforced the seriousness of the party’s demands.

Flanked by several DUP MPs drooling at the prospect of their demands being met, the DUP could well have the deciding vote in the Commons on a Brexit deal if May can successfully reign in dissent from within the Tory party.

“This was a British wide vote and this deal is not what people voted for. This is not what the DUP campaigned for we cannot and will not support a deal that doesn’t provide us at least one hour a week latched onto the nipple of the Queen. We want full access the Breastfeeding Union, we will not accept milk from a ‘pump and dump’ bottle”.