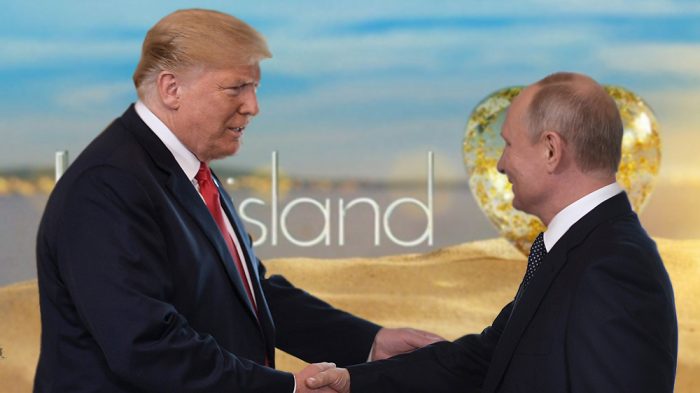 A STUNNING twist in popular dating reality TV show Love Island has seen two contestants choosing to recouple with one another, shocking millions of viewers who watched on in the grips of a befuddling horror as the process took place live on TV.

The recoupling process sees contestants choose who they most see a lasting future and ‘love connection’ with, and US president Donald Trump batted away the romantic overtures made by the key cornerstones of US intelligence and security before declaring his love for Russian leader Vladimir Putin.

“He is 100% my type on paper. Strong, authoritarian, disrespects the American people as much as I do,” reality TV contestant Donald’s speech began in the moments before he confirmed who he would choose to share a bed with in the Love Island villa.

“I think everybody knows I’ve had some tests, but everybody knows me I’m real, I tell it like it is. I’m honest and I’m loyal, so the person I’m choosing to couple up with is…Vladimir Putin,” Trump confirmed, much to the shock of the viewers who have said from the start that the relationship between the two was very one-sided with Vladimir getting all the benefits while not showing Donald any affection or paying him any attention.

Donald had previously received interest from the FBI, CIA and US Military forces who claimed to have his best interests at heart but the 72-year-old reacted badly to people talking about his love match in a negative way.

Typical of Love Island contestants, Donald has found it hard to articulate his feelings well and often gets bogged down in bullshit drama which has caused viewers to become irate with many wanting to vote him off the show before he gets mugged off by Vlad.

Donald’s decision to choose to remain joined at the hip with Vlad came after the couple spent nearly two hours unaccompanied in the Hideaway, a special room fitted with a bed where contestants have been known to whisper sweet nothings into each others’ ears and become intimate.