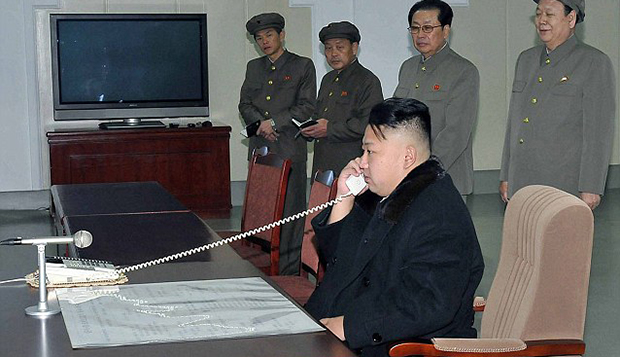 AN ONGOING internet outage in North Korea today was played down by government officials as nothing more than “a busy line”, stating that the glorious leader Kim Jong-un was responsible after picking up the land line to make a call.

Since this morning, the entire state has been without access to the world wide web, spurring fears that the country was under a cyber attack from the United States.

The loss of service came just days after President Obama pledged that the US would launch a “proportional response” to the alleged attacks on Sony Pictures, which government officials have linked to the hermit kingdom.

“Our glorious leader decided to call Russian president Vladimir Putin to wish him a happy Christmas and a prosperous new year,” local state media stated earlier. “This call was long and full of promise. We have now secured new allies against the filthy mutt dogs in the west.”

Addressing worried viewers, the announcer asked everyone to ignore such outages in the future, as they were just the great leader using the phone, and to be patient while he gets up to some serious business with his new found friends.

The entire country’s Internet is currently sourced to a 54k modem in the presidential palace. Officials claim that “proper broadband” is currently being installed and should be operating in the new year, thus relieving the phone line, and preventing any further embarrassment.