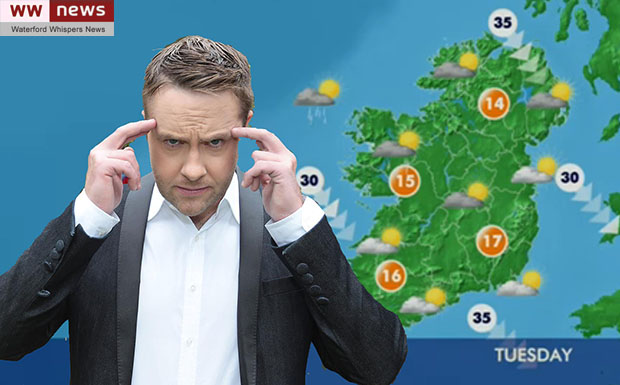 Good day to you all. Keith Barry here on Waterford Whispers News with this Winter’s weather forecast.

First off, let me thank all of you who have attended my fantastic live shows this year. Brain Hacker has been a stunning success for me. I believe everyone enjoyed it too and were blown away by my powers. I’m really looking forward to next year’s brand new show called ‘Keith Barry, Prediction Person’, where I’ll be predicting loads of things about audience members for three stunningly beautiful hours of first class entertainment.

For now, here is my weather predictions for the coming months.

I foresee large amounts of wind and rain right through the first two weeks of November. Clouds will form up and down the country in places with some light patches of blue sky appearing through the cracks. The rain itself will be wet and temperatures will range anywhere between -5 to 15 degrees. The wind will be Northeast to Westerly with the occasional South direction, forcing itself through to the West North in some of the days ending with the letter ‘y’. Slight chance of ground frost in some places as we get closer to the colder weather. Leaves will fall from the trees and the nights will incredibly get shorter. The grass on the lawn will stop growing due to my powers of perception.

December will be full of Winter like conditions and expect plenty of snow on the ground. The snow will be white and fluffy in places. Several people will slip on the ice in the middle part of the month. The entire month will resemble a Christmassy feel to it and expect some periods of intoxication leading up to, and after, the 25th of the month. I would advise everyone to wear warm clothes throughout the month as the weather will be Winter like – I can’t emphasize that enough. I’m also predicting very hot weather for Australia forcing many of your emigrant friends to tease you with poolside drunken pictures. There will be a total of 31 days in December this year.

January will be the worst month for weather next year and you can expect lots of wind and rain. It will bring a Winter like feel to it, forcing many of you out there to abstain from over indulging. Along with the poor weather, many of you will struggle financially due to a previously expensive December, which, may I just add, will be Winter like. In fact, I would go as far as to say that November, December and January will all be cold and Wintery. I’m also seeing plenty of solar flares for January. This will of course affect my own abilities as a brain magician so just be prepared if I cannot predict February through to April’s weather. I’d like to apologise in advance for this. I can however tell you that February will be the shortest month of 2015.

That’s all from me for now, I hope you take heed to my predictions and wrap up well. Now, I’m off to a temple in China to practice my predicting powers.