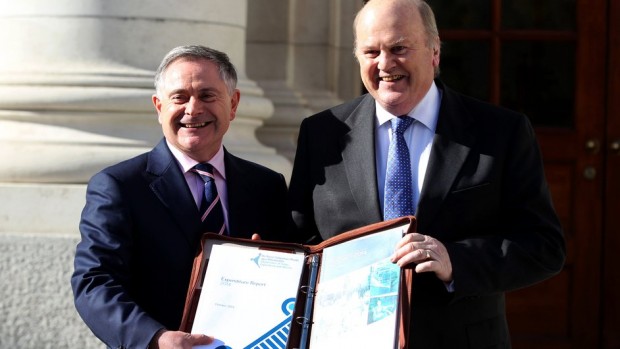 WWN has all you need to know about budget 2015. Our reporters were in attendance at Dáil Eireann and we can reveal how it all went down:

– Minister Noonan arrived at the gates of Leinster House this morning without his customary whips and chains leading many to believe this year’s budget would not be the unending sea of sadness many members of the public have become used to.

– While the Finance Minister sat in his office before the budget listening to ‘Lose Yourself’ by Eminem in a bid to ‘get in the mood’, the Government made the wise move to enter the Dáil chambers to ‘We built this city on rock n’ roll’ blaring from speakers.

– Noonan’s delivery of the 2015 budget was slow and methodical, as the minister struggled to read German.

– We learned that the price of cigarettes are to increase by €104.

– Figures seen by WWN prove Noonan’s budget is inaccurate as he appears to have forgotten to carry the one.

– The Government was so excited about this year’s budget, they trademarked the term ‘Celtic Phoenix’.

– Sadly the Government had to admit the country’s recovery was not spreading as fast as Ebola.

– Government announced the abolition of the controversial ‘double Irish’ tax loophole but will replace it with 47 other ways for multi-nationals to avoid paying tax.

– Family on the breadline delighted to hear corporate tax rate will remain untouched.

– 25% Christmas bonus for social welfare recipients will be spent on massive holiday in Barbados, confirms people who hate the poor.

– €212m for Arts, Heritage and Gaeltacht budget to be spent entirely on staging Shakespearean plays for junior and leaving cert pupils.

– There was panic as the Dáil bar ran out of Guinness, four minutes after the budget speech commenced.Staff member was sent down to the Shelbourne to see if he could borrow a keg.

-The Government secured neglected housewife vote at the next election by leaving tax on wine untouched.

– Numerous TD’s complained about the smell of farts in the chambers, but the Ceann Comhairle refused to open the door a bit.

– Sinn Féin confirmed before the budget speech began that they would disagree with everything bad in the budget.

– Noonan used the titles of 47 U2 songs in his budget speech as he is a huge fan.

– For the first time in five years the Government have lifted the happiness tax,which saw anyone who looked to be enjoying themselves stumped with an additional 5% tax on all earnings.

– Smiley face stamps will appear on all social welfare cards as the minister says ‘it’s the least we can do.’

– New reform in the debt collection sector means all correspondence between agencies and the public must contain one instance of ‘please’ and ‘thank you’ which will come as a great relief to families.

– The ‘squeezed middle’ have had their belts loosened by .4 of a centimetre. Minister Noonan explained that civil servants would go door to door to personally loosen that tightening ‘we have all felt’ over the previous few years.

– Money that could feasibly be used to end homelessness will go toward other people who are more important. Thank God.

– Additional child tax – families who expand their brood to 13 children or more will be charged an additional €14 for ‘taking the piss’. A disgusting attack on the Irish family.