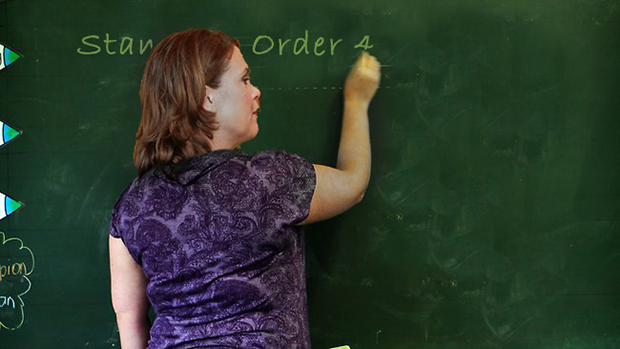 SINN Féin Deputy Leader Mary Lou McDonald spent last night writing out 200 lines as punishment for talking back to the Speaker of Dáil Eireann, it has been revealed.

The heated exchange took place as Ms. McDonald addressed the Taoiseach following yesterday’s Budget announcements, during which Ceann Comhairle Sean Barrett ordered her to obey standing order 45, which states that a member of parliament must address the chair and not a member of another party.

Annoyed that her speech had been cut short for what she later described as “some bullshit”, Mary Lou then accused the speaker of bias against the opposition, at which point she was asked to leave the chambers.

Slow motion replays of the incident show the Dublin Central suspiciously scratching her eye with an extended middle finger while addressing the Ceann Comhairle, resulting in her being given lines to write out as punishment.

“Sinn Féin has had to watch every other party take turns ruining this country, but I’m the one who gets crap to write out? That is way harsh,” said Ms. McDonald, who had to miss the first half of the Ireland vs. Germany match because she was doing her lines.

“It took me nearly an hour, and my wrist is pure killing me. That Ceann Comhairle just has it in for me. 200 lines just for talking back to him? Paul Gogarty only got 20 lines to write out that time he told Emmett Stagg to go fuck himself”.

In an effort to cut down on the time spent writing out her punishment Mary Lou is believed to have taped two pieces of chalk together, a trick taught to her by Sinn Fein leader Gerry Adams, who pioneered the technique when writing out “I must not tell fibs about my involvement in the IRA” 500 times in the mid-nineties.