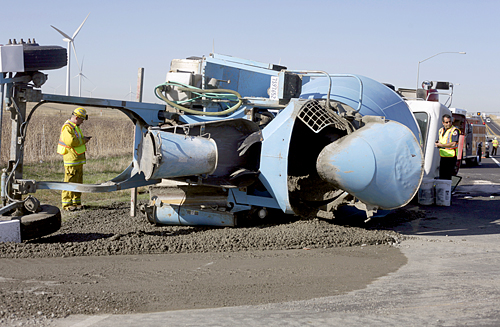 A tragic case of human error has resulted in the destruction of one of Ireland’s most treasured pieces of natural and unspoilt beauty – the Burren.

An 18-wheel truck carrying countless tonnes of cement veered wildly off the R460 this morning and ploughed into a section of the Burren, launching tonnes of concrete across the entirety of the Burren National Park, which many believed was just a matter of months away from becoming a UNESCO world heritage site.

Locals rushed to the site after hearing the impact of the crash only to become trapped in the fast setting concrete prompting the beginning of a lengthy and arduous rescue operation.

Confusion still remains as to what a second cement truck was doing in the exact same location having been struck by the first vehicle as it veered off the road.

“What are the odds, two cement trucks crashing simultaneously in the middle of the Burren,” pondered one local stuck knee-deep in concrete.

The world-famous karst landscape is now completely covered over leading the Government to declare the incident an environmental disaster.

Ferrity Construction, the company responsible for the concrete have said they deeply regret the incident, with one manager going as far as to outright accept blame for the incident.

“I don’t know what we were thinking, putting that much concrete in the one mixer and on the one truck. But Tommy said ‘it’ll be grand’ and look at him now,” said a teary Ferrity logistics manager Darragh Ganley.

Tommy Burns, the driver of the truck, was tragically covered from head to toe in concrete, but was saved from certain death by a local woman who reached him with two straws which have been strategically placed up his nostrils, allowing him to breathe.

Fresh from his appointment as Minister for Environment, Alan Kelly was on site at the Burren in a matter of hours, arriving this lunchtime to assess the damage and formulate a plan.

“Sadly, there is little else to do, the damage is done and it is final. What we have now is Ireland’s biggest car park and we must seek to sell it as a tourist attraction, maybe a concrete museum?” the dejected Minister said.

Research carried out by Tourism Ireland a number of years ago suggests that American tourists love car parks, meaning the Burren may finally overtake the Cliffs of Moher as Ireland’s most visited tourist attraction.