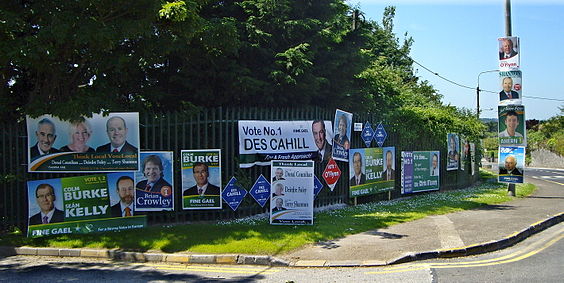 Lampposts up and down the country continue to be peppered with Ireland’s leading sycophants and sociopaths as the race for local and European elections really hot up.

With just a month until ballots are cast by the electorate politicians are eagerly pounding the pavement and reluctantly talking directly to members of the public.

“It is a dream and a nightmare all at once,” shared prospective councillor Martin O’Regan, “going door to door is a great way to really practice that blank vacant look perfected by senior politicians I admire but there is the small matter of having to endure 4,000 conversations about potholes.”

It is believed that several thousand local election candidates will make close to 4.75 million empty promises in the coming weeks with promises ranging from the believable to the downright ludicrous.

“It really pisses me off, all the bullshitting,” shared angry voter Hannah Grealish, “I had some guy knock to the house last night saying he could ‘make a difference’, I’d had it up to me hoop with the lying from politicians to be honest.”

Many other voters enjoy this time of year as it offers them the opportunity to shout at and insult young, wet-behind-ears candidates from major political parties.

“My favourite are the Fianna Fáil lot, I’ve just taken to making random animal noises when I open the door, ‘Mooooo’, ‘Baaaaa’ etc. The greatest hits of animal sounds if you like,” shared father-of-two Sean Feeney, “fair play to the lad from the Green Party, he just ‘mooed’ right back at me – that’s my first preference sorted.”

Some the biggest fibs made by politicians include ‘who me? Corrupt? No of course not’, ‘I wouldn’t know anything that now but’, ‘I agree’, ‘I understand’, ‘sure I love Tom Hanks too’, ‘don’t worry I’ll find a cure for aids’, ‘that was before I joined the party’, ‘I have been heavily involved in the local community for years’, and voter favourite ‘if you give me your vote I can promise to’.