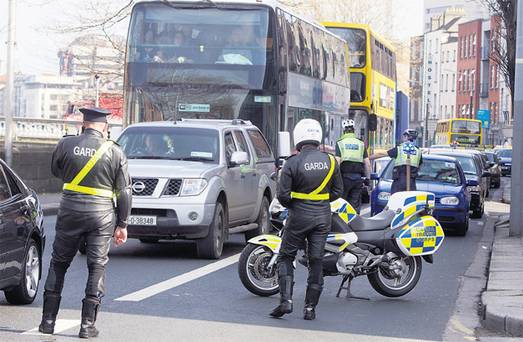 An initiative by Irish motorists has been launched today following the latest Garda crackdown on people who use mobile phones while driving.

‘Look Out For The Guards’ was launched in Dublin and is a scheme which aims to increase drivers’ interaction with one another in areas of the county where there is a large Garda Traffic Corps presence.

“We’re just trying to make the roads safer for drivers who need to snapchat while driving,” explained one of the people behind ‘Look Out For The Guards’ James Dunphy, “the last thing you want when you’re doing 120 in a 50 zone is those blue lights flashing, we’ve had too many tragic instances where a motorist has broken a red light and not come home – until the Guards are finished ripping him a new one.”

Many motorists at the launch shared the feeling that Gardaí are actually trying to make it more difficult for drivers to effectively multitask while driving great hulking pieces of metal.

“We’re looking to expand the scheme into other counties of course, but at the moment we’re urging the motorists of Dublin to flash their lights, beep, phone, text etc, to warn fellow motorists that there are Gardaí in the area trying to enforce the law,” shared attendee Clare Wilkins.

“This country has been crying out for a more organised way to pretend we’re good, conscientious drivers and now we have it,” shared serial speed offender Gary Hogan, “I’d be doing over 100 easy, trying to pick the perfect song on me iPod so I wouldn’t notice the Guards at all but now we’re looking out for each other, it’s great.”

“I can’t tell you the number of people who have come to me saying they are afraid to take a selfie while driving,” shared James Dunphy, “that’s not an Ireland we want to live in obviously so we hope to change that in future.”