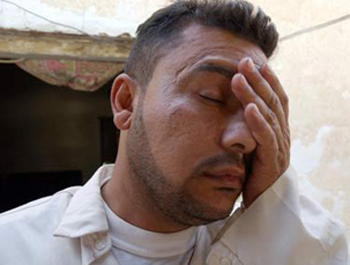 HIS FLAT was destroyed, his underwear soiled and all he can remember is leaving Geoff’s shortly after midnight. Ninety eight the Glen had been transformed from a beacon of international development to a giant narco-farm controlled by a group of homosexual travellers. All in the space of 24 hours.

But unemployed deli assistant, Tony Watts, was strangely optimistic about the future: “None of the people left in my flat were desperate for a simple explanation into what the hell happened last night – at least they had a good time anyway…I think.

“I spent ten hours on the piss, eventually not knowing whether I wanted a shit or a hair cut. I was fucked man. All I wanted was a taco fry!”

It was the first time Watts had ever invited a bunch of people back to his Gaff – and probably the last.

“We met him outside Abra. He invited half the town back to the house boy.”

In a statement to WWN, tenant Watts, dressed from head to toe in a stained duvet, looked to his i-phone picture gallery for some explanation into what happened while in the grip of a drunken amnesia.

“I don’t remember a fucking thing boy! As soon as I scrolled through the picture menu I realised that I was in serious trouble.” he said.

“Things started to get worse, I don’t remember taking any of those pictures….who the hell is that guy with the lamp shade? Why was he doing that to my pillow? Jesus Christ! Is this even my phone!!???” said Watts, originally from Ferrybank.

“I can’t remember a single word or action after leaving Geoff’s. That German beer is strong.”

It is understood that Watts originally invited 8-10 strangers back to the bedsit at around 1-o-clock this morning.

One man said “It was pokey place, but the atmosphere was there for a good auld session. That poor guy didn’t know what he was letting himself in for. People just started arriving from everywhere.

“Those gay travellers just stole the show in the end. We all just left when they came.”

Today, regrettably for Watts and his landlord, the bedsit is now occupied by the group of homosexual traveller men.

“I had to move out this morning.

“I eventually woke up at 10am to find several strange men standing over me, smiling and dancing to rave music that was emanating from an old mobile phone. You could barely hear it.

“They then asked me to leave and said they had already packed my stuff neatly into a wheelie bin for me. I had no option but to go. I knew they were travellers by the accent.

“They were off their faces. Hugging and shit. I was so embarrassed pushing that bin down to Rapid cabs. My underwear sticking out from the lid.