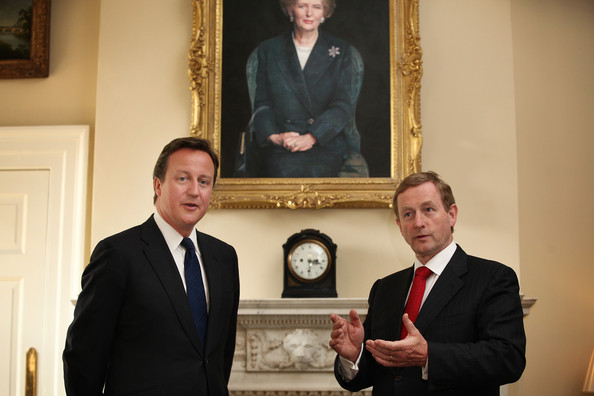 In what is being hailed as a public relations masterstroke by everyone in the Irish and British media, Taoiseach Enda Kenny is set to meet his British counterpart in a bid to look more likable by utilising a method known as ‘basic comparison’.

The British Prime Minister David Cameron, it is universally accepted, has an eminently punchable face, which is set to make Enda Kenny appear ‘bearable’ to increased numbers of the Irish electorate.

“I have to hand it to Fine Gael, it’s an ingenious move,” offered a Fianna Fáil spokesperson, “I’d be more pissed off but jesus, you have to say it’s a smart move”.

It is not yet known if David Cameron realises he is being openly exploited by Enda Kenny but it is understood that it is next to impossible for the Tory leader to come off as anything other than a giant prat.

“We’re a paper that is occasionally critical of An Taoiseach,” shared an Irish Times journalist, “but it almost appears as if David Cameron’s flesh is seeping away from his face trying to distance itself from any association with him.”

“We’ve been angling to get over to London again since the last meeting in 2012,” shared a Fine Gael party insider, “the moment Irish voters saw Enda shaking David’s hand it was game, set and match Fine Gael. There is just some violent feelings that man’s face stirs up in people, they completely forgot about how much Enda gets on their tits most of the time”.

A recent poll in British newspaper The Guardian revealed that 70% of UK voters now refuse to acknowledge Cameron as human, instead referring to him as ‘that collection of chubby flesh with the toff mouth on the end of it’.