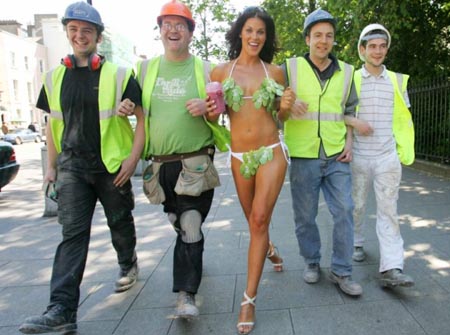 News has reached WWN that a tech company operating in Dublin has redefined the definition of ‘stupidity’.

The company and its staff of 4 have been hard at work for over 9 months developing a new app aimed at helping businesses to be more efficient and cost effective.

WWN understands work on the app came to a close last month and the company had earmarked this week to launch their product through traditional PR avenues.

Shockingly, it is thought the company in question, Opti-tech Solutions, are not going to use a ‘model’ dressed scantily clad in a bikini to aide them in promoting their new app.

WWN sought the expert opinion of PR guru Larry Eames regarding this idiotic business decision. “They obviously hate themsleves, that’s my first thought,” shared the PR veteran of 30 years, “if you’re not being casually sexist on Grafton street you’re not serious about succeeding in business, simple as”.

Conventional wisdom suggests that by abandoning the well trodden and trusted promotion technique of bikini models Opti-tech Solutions are risking the very viability of their business. WWN spoke exclusively to the company’s founder Liam Gunn. “It is unpatriotic of me not to use a model? Jesus, eh no I don’t think so,” said Gunn, whose IQ is probably less than 12.

“We thought why not try to sell the product without a novelty sized cut-out of it held by a 20-year-old woman in a bikini…in December,” concluded Gunn.

WWN does not like to weigh in with its opinion on the news, we pride ourselves on our impartial reporting much like the rest of the media, but Mr. Gunn’s comments leave us free to speculate that he has never even read a book. Or that perhaps in his spare time he likes drowning puppies.

Mr. Gunn’s blatant disregard for Ireland’s long standing tradition of launching anything and everything alongside a woman dressed in next to nothing puts him in such exalted company as Adolf Hitler who of course famously refused to have bikini models at the Nuremburg rallies.