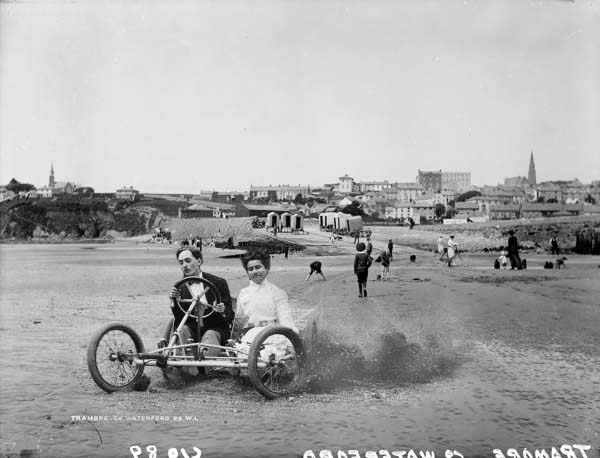 Drifting, a driving technique where the driver intentionally oversteers causing loss of traction in the rear wheels while maintaining control, was first invented in 1923 by Tramore automobile enthusiast Thomas Kennedy.

Mr. Kennedy, a fast food business owner from the town, first discovered the technique while driving on the local beach with his fiancée Martha

The 22-year-old became a regular sight on the strand and was reported to be a ‘bit of a pest’ for other residents in the area.

Not only did he invent ‘drifting’, he also started up the first ever ‘Tramore Cruise’ in September that year, by inviting other likewise young men to join him in his continuous revolutions of the beach and prom.

Kennedy insisted that every driver must bring their own ‘lac’ along for the spin, and that a regular beating noise be emanated by them whilst driving.

Over the next five years, Tramore became a hotspot for young boy-racers of the 1920’s, with the annual cruise growing in popularity every year.

In 1928, the town council of Tramore decided they had enough of the annoying engine noises buzzing around their town, and banned all vehicles from the beach area. A rule which still applies today.

Unfortunately,Thomas Kennedy and his wife were killed later that year when he accidentally drifted off a local cliff and into the sea.