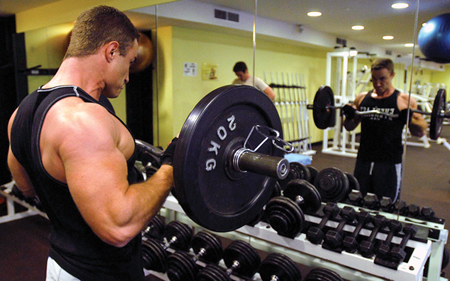 Gary Wilson, a 27-year-old financial services consultant, took a half day from work today in order to beat the evening rush at his local gym in Sandyford, south Dublin.

While it appeared at first to be a wise decision the cold hard truth of the matter suddenly dawned on Wilson as he approached the free weights; the gym was virtually empty.

With no young and attractive female gym members in the vicinity Wilson realised there was absolutely no reason to increase his muscle definition and bone density.

It is estimated that as much as 0.00003% of male gym members partake in intense and demanding weight training sessions for reasons other than impressing women thus rendering Wilson’s early attendance useless.

As the clock ticked closer to 5.30 p.m Wilson took to adjusting his singlet and retying his shoelaces which were perfectly tied anyway in a desperate attempt to waste time.

There was a brief glimmer of hope when the female changing room doors burst open but sadly they revealed only a stout cleaning lady who was in her early 50s.

Wilson became increasingly bored waiting for women to arrive that he even engaged in a conversation with a gym employee about bicep curls and doms.

He quickly zoned out as his eyes watched the gym entrance like a hawk. A hawk with really big muscles.