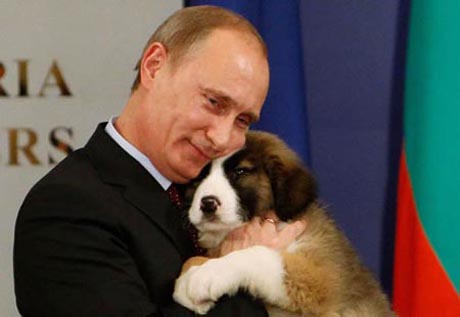 RUSSIAN PREMIER Vladimir Putin has stoutly rejected claims that despite every effort to suppress so-called ‘homosexual propaganda’, the 2014 World Championships have actually turned out to be a flamboyant and excessive display that bares all the hallmarks of being organised by members of the gay community.

In an exclusive interview with WWN’s roving reporter and resident fashion expert Terry Bull, Vladimir Putin refuted assertions that the games have been FAB-U-LOUS.

Terry Bull: ‘Vlad, can I call you Vlad?’

Terry Bull: ‘Vlad, what’s the craic with uniforms? They’re so tight and full of colour especially the Jamaican ones. You’ve got to love a bit of yellow…but when you think about it, it’s a bit gay, isn’t it?’

Vlad: ‘No. Russia cannot be gay. It’s an umpossible’

Vlad: ‘No…Okay I give you second one, yes. No. Russia strong as bear’

Terry Bull: ‘But you’re handing out lovely shiny necklaces and teddy bears…you can see what I’m getting at. ‘Russia strong as bear’…Russia gay like a strong gay bear!’

Terry Bull: ‘Ya what? Do you mean YSL? Did they do the uniforms?’

If anyone has information regarding the whereabouts of Terry Bull please contact WWN.