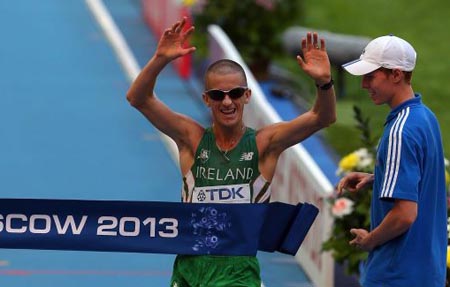 THE NATION has been engulfed in a walking frenzy following a landmark day in Irish sport. Newly crowned World champion Rob Heffernan walked to victory in a steely display and in doing so has gained a gold medal and a place in the history books.

This achievement has not gone unnoticed by a proud and appreciative Irish public, many of whom took to the cobbles and walked to work partaking in what some experts are calling ‘exercise’.

Dave Little, a shop owner from Cork, described the wave of elation sweeping the nation to WWN.

“It’s almost unparalleled, Rob’s achievement. So naturally I’ve been giving it a try, this walking lark. I usually drive into work and after an unsteady first few steps on the feet I thought about heading back to the comfort of the motor but it’s fierce craic isn’t it?”

Jennifer Giles, a trainee solicitor from Louth, summed up the mood of an enthusiastic public: “World champions don’t grow on trees here do they? I’ve been watching the race over this morning to get to grips with the technique but I’m only out the door and I’m knackered so I’ll be getting a taxi the rest of the way, but yeah we’re great at the old sport”. ‘

The Heffernan’ or ‘The Heffo’ has sparked a craze in offices up and down the country with thousands of people texting their friends asking: ‘fancy a walk this evening?’ thus transforming the sporting landscape in Ireland until they cancel on one another at the last minute.

Leo Vradkar, minister for transport, tourism and sport was quick to congratulate Heffernan on his victory. “Well the government can’t take all the credit but I mean, just look at all those paths will built enabling Rob to walk on throughout his career…it’s almost the coalitions medal, maybe we can half it?”

While the weight of his achievement has yet to fully sink in, Rob Heffernan admits he is incredibly proud of becoming the first Irish person to win World Championship gold in 18 years.

He spoke to WWN sports exclusively about his journey up until this point.

“Sheer joy to be honest. Day in, day out all that training, hard work and chiropodist bills but I can’t have a moment like this and not speak about my inspiration.

I was close to giving up a few years ago but I caught sight of that ‘Go walking, it’s what we do’ advert and that was it for me, every bone in my body was walking toward this goal.”