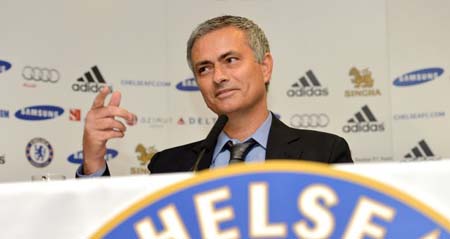 JOSE MOURINHO held court in front of a giddy football press core at one of his last pre-season press conferences before the start of the new season.

Chelsea, like many other Premier League teams, were competing in friendly matches in far flung corners of the planet to spread the message of extensive merchandise available to fans at exorbitant prices.

Mourinho, accustomed to the warm kindly laughter of journalists offered a number of pithy and subtext laden lines.

“I won’t play mind games, or will I?” Mourihno said to a fresh dash of cameras flashes, the twinkle in his eye at the centre of every photographer’s composition.

The Chelsea manager is expected to make a third and final bid for Manchester United’s Wayne Rooney and was candid when discussing the striker.

“Bobby Moore. West Ham. Bobby Charlton. Manchester United. Wayne Rooney. Chelsea? He can be these things for us and I can be for him a great love. A great all consuming heterosexual love.”

The assembled press bathed the ex-Madrid coach in appreciative smiles and gentle laughter, seemingly inviting him to carry on speaking.

“Mr. Rooney is for Chelsea the piece of the puzzle, many people in the past say his hair is not very good. I love it. I think it is top quality hair, better than Messi’s. Some people say he is like Shrek. Have you seen Shrek? Very entertaining, suitable for every age. It is a compliment in a way. I would very much love to be Wayne’s donkey, no?”.

Rumours of Rooney’s imminent arrival at the London club will only increase in light of Mourinho’s latest comments.

The press conference however was brought to a swift end when three journalists wearing t-shirt’s bearing Mourinho’s image rushed the stage to hug the manager.

The ecstatic and tearful teenage-like professionals were removed by security personnel and the press conference brought to an end.

Mourinho, ever the mind game enthusiast, concluded with a veiled stab at his rivals. “Manchester City. Boyzone. Manchester United. Westlife. Chelsea. Take That.”