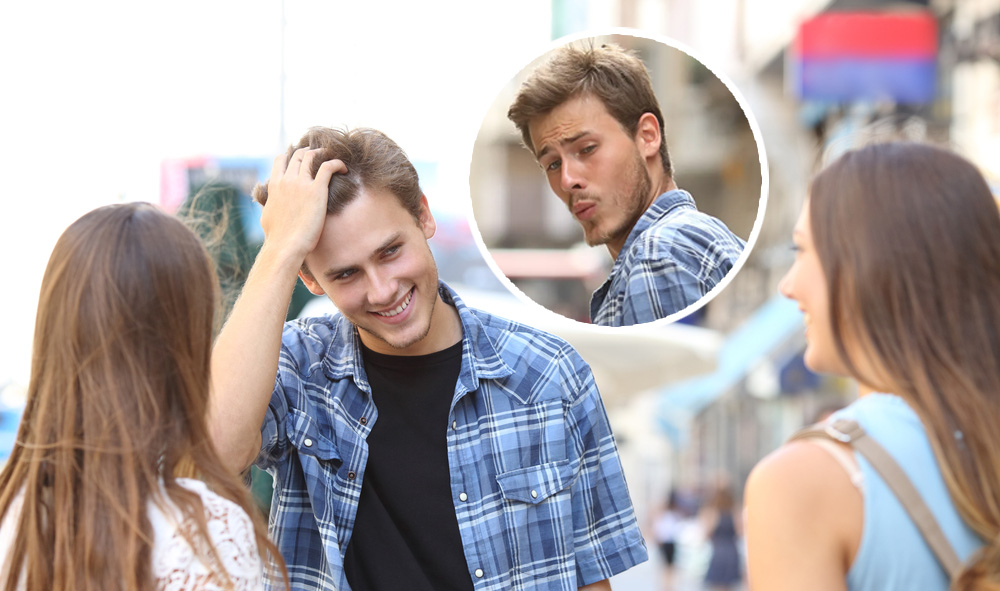 THE WORLD knows them as the stock models who gained internet fame through the ‘distracted boyfriend’ meme, but Carla Torres, Brian Delgado and Ffion Grainger know one another as an irreplaceable third of beautiful and rewarding polyamorous love story.

“It’s funny, a lot of the online memes and speculations around the photoshoot sort of opened our eyes to what was right in front of us; that chemistry, that tension,” Brian explains, who was initially in a relationship with his ‘meme girlfriend’ Ffion.

“We were all back at my place, just having some wine and laughing our asses off at the flood of memes that emerged weeks after the shoot and then we sort of all looked at each other and ‘it’ clicked,” explained Ffion, of have two became three.

A less than ‘traditional’ relationship, the trio are all too aware of how some will judge.

“We get that it’s not ‘conventional’ but we make it work. Sure when it comes to cold feet in the bed at night or someone stealing the duvet it can get a little tense but there’s very few downsides,” adds Brian.

“I’ll be a little more honest about downsides,” Ffion counters, laughing disarmingly, “we still haven’t quite got our kissing techniques down after what, four years? There’s a lot of bumping foreheads and bashing noses, then in the bedroom I’ve lost count at the number of elbows and knees I’ve been on the receiving end of but this is a crazy ride none of us want off of”.

Now living together for two years, the truple’s love for each other has grown and matured and is set to even outlast the iconic meme they gave life to.

“I can’t speak for the other two, but no I wouldn’t rule out expanding the relationship in future. It was my friend Ethan who took the photos everyone has come to know, he initially wanted in but we all agreed he was ugly – he basically looks like a load of sausage meat crammed into a sock. He won’t be offended by that, Ethan would admit it’s true,” Carla adds.

“Traditional heteronormative monogamous relationships just don’t cut it anymore, sure we get some funny stares in public – but not because they recognise us from the meme, because we’re not shy about public displays of passionate three-way tonguing,” Ffion shared.

Well-meaning people are quick to ask intrusive questions but it’s clear Brian, Carla and Ffion don’t mind sharing details about what is a rewarding and life-affirming love.

“People always joke that with Carla and Ffion, I’m a lucky guy who probably doesn’t have to do any cooking and cleaning ha, but seriously they’re fucking slobs at the best of times,” concluded Brian, ahead of a night on the couch.