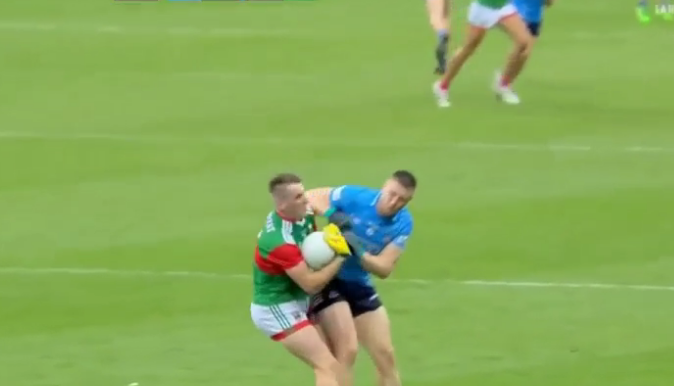 GARDAÍ say there is ‘nothing they can do’ about an alleged assault which took place on a private premises Saturday, even after it emerged there is as many as 24,000 eye witnesses and extensive CCTV footage, WWN Sport can confirm.

“A double jaw fracture? Ah I think someone’s pulling your leg,” explained one man clad in a black jersey and shorts to gardaí, who turned up to the premises requesting a copy of the CCTV, which has been circulated widely online.

“There was the usual bit of rough housing and steam-letting-off you get when you’ve a big group of lads together, but that was it,” confirmed the man, before gardaí repeatedly waved their hands over his eyes to no reaction whatsoever.

The gardaí’s investigation was further hampered by a considerable volume of witnesses changing their story.

“When I first saw it, I said ‘fuck me he’s probably fractured his jaw in two places and knocked him the fuck out’. I nearly called an ambulance, but upon reflection it’s a fair shoulder and if anything I wish I saw more of that,” shared one Dublin man and impartial witness.

UPDATE: After more witnesses with a very different take on things have come forward, gardaí can now confirm a Mayo man has been detained for questioning in relation to bruising a man’s elbow with his jaw.