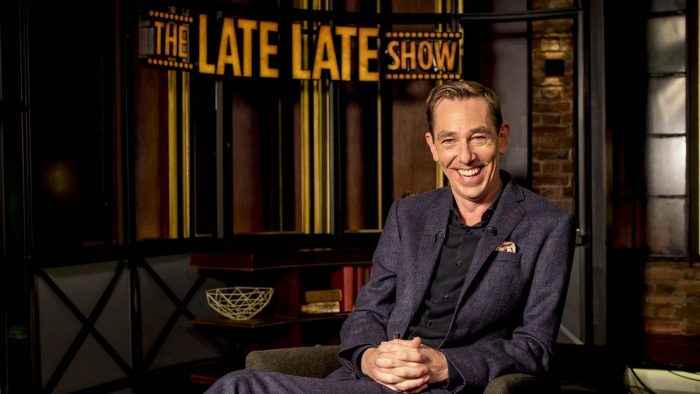 THE Late Late Show is on its summer break leaving a void in everyone’s life and blowing a hole right through a reliable sit down of a Friday evening.

But instead of cursing not be able to stare at Ryan Tubridy’s face for 3 hours, consider recreating and replacing the magic of The Late Late Show with these simple steps:

– Just stop any random person in the street and ask probing questions of them, asking them to relive the most traumatic incidents in their life. When they break down in tears, it’s game ball!

– Hand out something free to everyone in your sitting room.

– Invite someone over to your house that’s was only over three weeks ago.

– Did you just have five minutes of lighthearted conversation or were you chuckling at an amusing video online? Take a sudden handbrake turn and Google ‘most depressing thing you can possibly imagine’ to switch things up and give yourself emotional whiplash in true LLS style.

– Recreate the feeling of watching business focused ‘New Products Night’ by going round to your neighbours house and rooting around in their skip.

– Spark up conversation with a person under 35 who has as many as 50 followers on TikTok and refer to them as ‘an internet sensation’ and pretend they are as famous as Kim Kardashian.

– You don’t need to actually watch the Late Late Show to feel bad that Ryan Tubridy gets paid ten grand a week, you can do that any time you like. He gets paid that money whether the show is on the air or not, so you can go ahead and have that sense of aghast fury all summer long.

– Invite a Marty to your home for a cup of tea; Whelan, Morrissey, it doesn’t matter they’ll be available and willing.

– Invite a local GAA head into your living room and begin 15 minutes of an excruciating interview that’s like pulling teeth because in true LLS style it is abundantly clear you’ve no interest in sport and have no clue who this lad is.

– Now, another handbrake turn! Invite two auld lads you know into your living to debate decades old political feuds with all the anger and bitterness displayed by warring farming brothers amid a dispute over the contents oof their father’s will.

– Ask yet another person (a neighbour, friend or family member, it doesn’t matter) to dredge up horrible memories of the most emotional devastating time in their lives. Tell them they’re awful brave, but not before you ask them even more uncomfortable questions.

– Announce that next week you’ll be speaking to Francis Brennan, some young person RTÉ is forcing on the unsuspecting public, Francis Brennan again and the Irish man who apparently invented the holes in Swiss cheese.