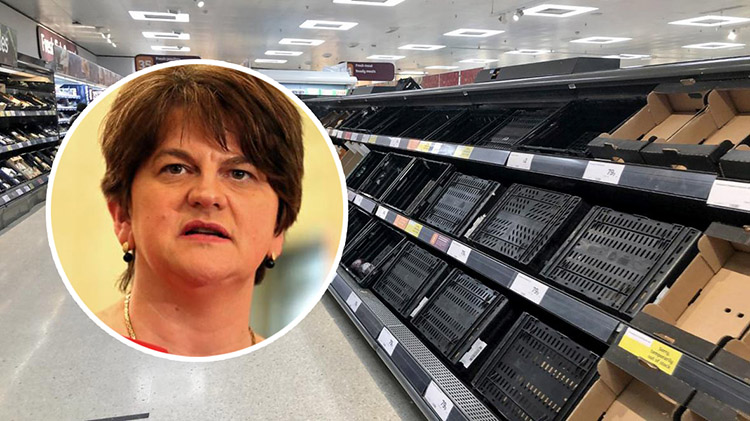 THE DUP party spent the day sharing their anger at the sight of empty shelves in supermarkets until someone pointed out that maybe championing Brexit and setting up a sea border in the Irish sea may have something to do with the current crisis.

“A sea border? No, I don’t think so. You need your eyes tested. You should eat some carrots… when they’re back in stock,” shared DUP leader Arlene Foster.

Foster, who is adopting a ‘let them eat sovereignty’ approach to food, now turned her attention to finding the bright side to being starved because of Brexit.

“Technically when you’re screwed over by the English you’ve been ‘Royally’ screwed. What an honour. If preserving this glorious Union means preserving hunger so be it, it will be our privilege to pass the pain to the people of Northern Ireland.”

“This is not the fault of Brexit of course, no, this is the fault of everyone who warned us well in advance such a thing would happen,” added Foster.

In an attempt to plug the gap in provisions Foster said she would make Sammy Wilson available to the public to eat if the situation worsened. Plans to feed people using Ian Paisley Jr had to be shelved as he’s probably not remotely working from the Maldives.

“Honestly, the DUP were the last crowd I thought would be into hunger strikes,” observed one local.

Meanwhile in the Republic, food shortages are also taking hold with significant delays and food wastage occurring at ports, however, everyone has been asked to ignore all that as it makes it harder to point and laugh at the Brits.